Osaka has a well-organized bus system. However, travelers visiting the city probably don’t need to use buses to get around, because the subway and local train system is more convenient and often cheaper and quicker too. There are some discount tickets and passes however, that include bus transport along with other forms of public transportation. This article will explain everything you need to know about Osaka buses if you decide to use them. 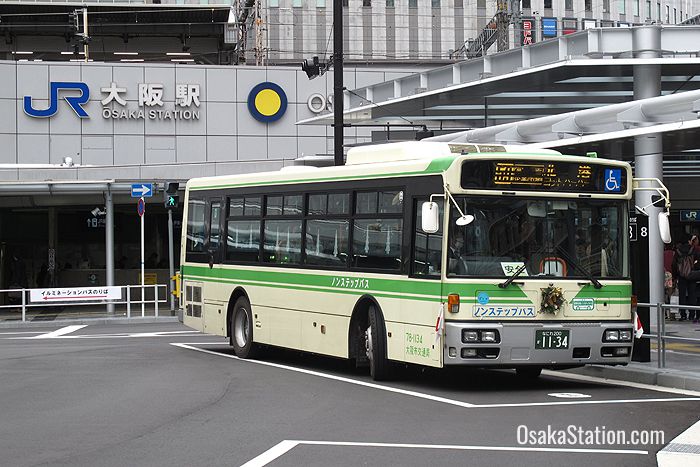 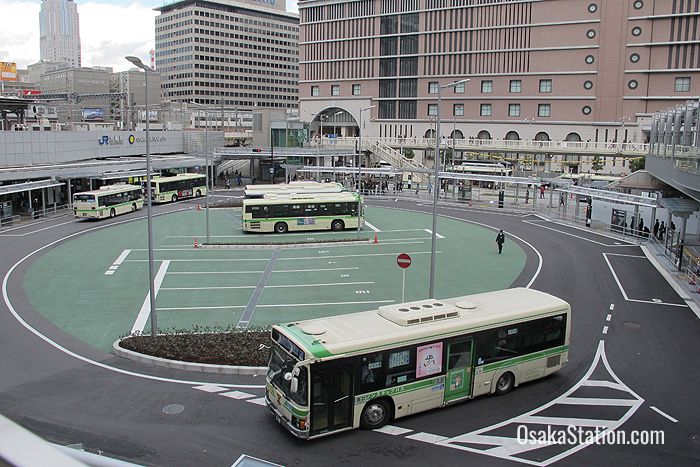 There is a bus terminal on the south side of Osaka Station to the east of the Daimaru department store. There are 12 stops here where buses pick up passengers. Here are three bus services you may consider using: 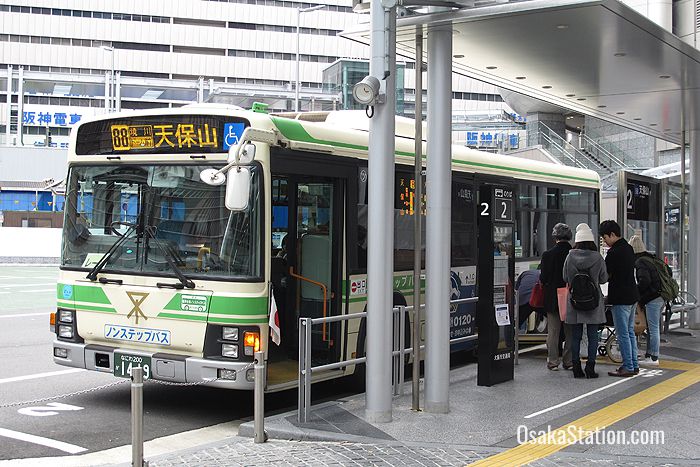 The bus for Tempozan at bus stop #2

Bus From Osaka Station to Tempozan

If you want to visit Osaka Aquarium Kaiyukan at the Tempozan Harbor Village you might want to take the bus. The subway is quicker but the bus is cheaper. Take bus #88 from bus stop 2 at Osaka Station Bus Terminal. The bus will take about 45 minutes to reach Tempozan but cost only 210 yen. Traveling by subway will get you there in 20 minutes but cost 280 yen.

Bus From Osaka Station to Abenobashi

If you wish to go to Tennoji then you can take bus #62 from bus stop #3 at Osaka Station and get off at the Abenobashi bus stop. The Abenobashi stop is very close to Tennoji Station. The bus will take 36 minutes for the same flat fee of 210 yen. This is cheaper than using the subway from nearby Higashi Osaka-Umeda Station which costs 280 yen for 13 minutes. However, taking the JR Yamatoji Rapid Service is cheaper and faster at 190 yen for 16 minutes. Though the bus is not the cheapest or quickest option, you might decide to use it if you have a discount pass or because the bus terminal at Osaka Station is so conveniently located.

Bus From Osaka Station to Namba

If you wish to go to Namba then you can take bus #75 from bus stop #3 at Osaka Station. This bus takes 26 minutes for the same flat fee of 210 yen. In comparison taking the subway Midosuji Line from nearby Osaka-Umeda Station will get you to Namba in 9 minutes for 240 yen. You can also use the JR Osaka Loop Line and JR Yamatoji Line and get to Namba in 22 minutes for 190 yen but you will have to change trains. Again taking the bus is not the cheapest or quickest way to get to Namba but it is the easiest. 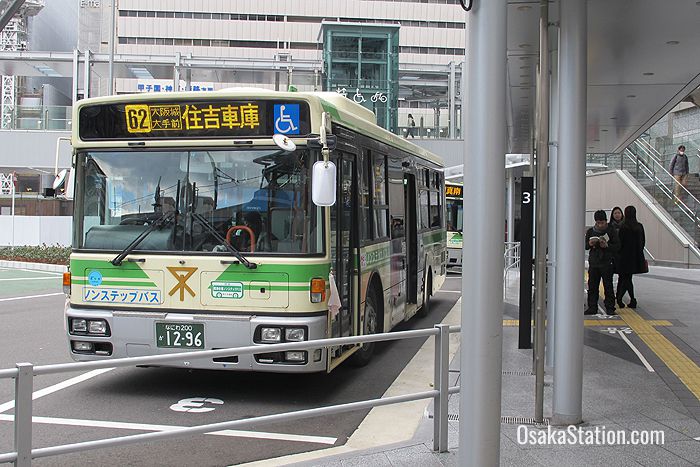 The bus for Abenobashi at bus stop #3

There are a number of discount travel passes you can use in Osaka that include bus transport along with other forms of transportation.

The Osaka Visitors Ticket (OVT) is a one day pass for overseas visitors that covers all the buses, subways, and trams in Osaka and also gives discounts at 37 sightseeing locations. The OVT costs only 550 yen but you will need to show your passport when you buy it. For details of where and how to buy it visit the Osaka Municipal Transportation Bureau website.

The Osaka Amazing Pass is a one or two day pass that gives unlimited travel on buses, subways, and trams. In addition it also gives you FREE entry at 30 sightseeing locations as well as special offers at other facilities, restaurants and shops. The one day pass costs 2,300 yen and also includes the use of the private following railways in Osaka: Hankyu, Hanshin, Keihan, and Nankai. The two day pass costs 3,000 yen but does not include private railways. For more details check the official Osaka Amazing Pass website.