Osaka Monorail is an elevated single-track railway network in northern Osaka Prefecture with a main line and a branch line. The Osaka Monorail Main Line runs between Osaka Airport Station and Kadomashi Station and connects destinations in six cities: Toyonaka, Suita, Ibaraki, Settsu, Moriguchi, and Kadoma. This line provides the only direct rail access to Osaka Itami Airport and is also useful for the Osaka Expo Park. The branch line is called the Saito Line and it runs north from Banpaku-Kinen-Koen Station to Saito-nishi Station in Ibaraki Prefecture. Osaka Monorail is run by a private company so this line is not covered by the Japan Rail Pass. 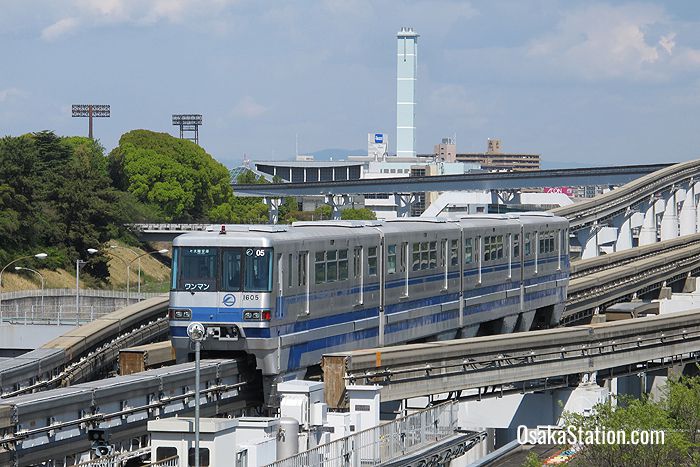 There are 14 stations on the Osaka Monorail Main Line.

The key destinations and transfer points are given below with fares and journey times given from Osaka Airport Station. 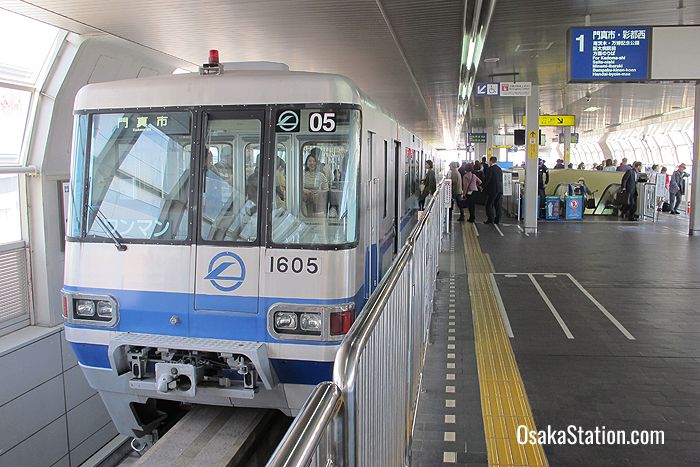 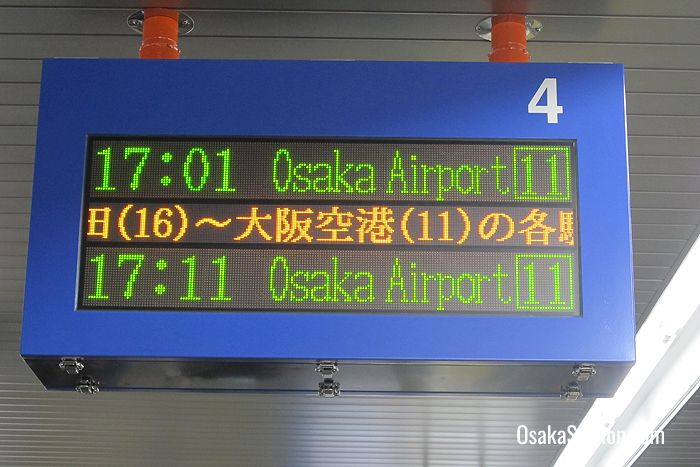 Transfer here to the Kita-Osaka Kyuko Railway. This line is essentially an extension of the Midosuji Subway Line and so you can take trains directly from Senri-Chuo Station to key locations in Osaka City such as Umeda Subway Station, and Namba Subway Station.

This station serves Osaka Expo Park, an extensive park and cultural zone which was created on the former grounds of the 1970 Japan World Exposition. The park has extensive facilities which include three museums, ponds, traditional gardens, sports grounds, seasonal flower displays, sculptures, an entertainment and shopping center, a hotel, and a ferris wheel. This station is also the southern terminus of the Osaka Monorail’s Saito Line.

Transfer here to the Hankyu Kyoto Line with services bound for Hankyu Osaka-Umeda Station or for destinations in Kyoto.

Transfer here to the Tanimachi Subway Line with services bound for key locations in Osaka City such as Higashi-Umeda Station, Temmabashi Station, and Tennoji Station.

Transfer here to the Keihan Main Line with services bound for Yodoyabashi Station in Osaka, and destinations in Kyoto.

There are 5 station on the Saito Line.

Key destinations are given below with fares and travel times from Banpaku-Kinen-Koen Station. 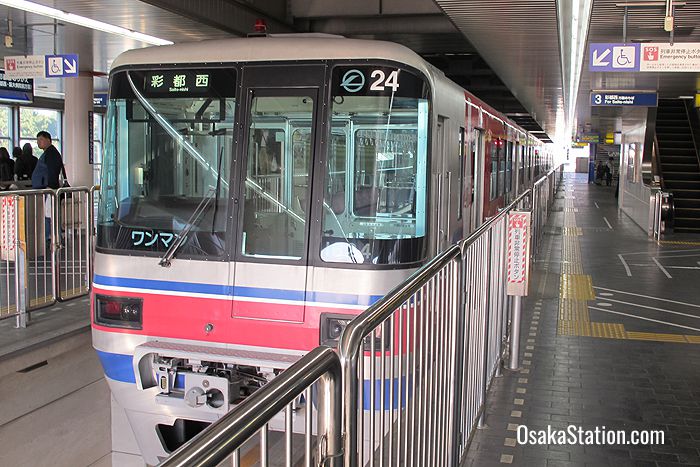 This station serves the eastern entrance of Osaka Expo Park.

This station is convenient for Osaka University Hospital

This station is close to Osaka University’s Minoh Campus. 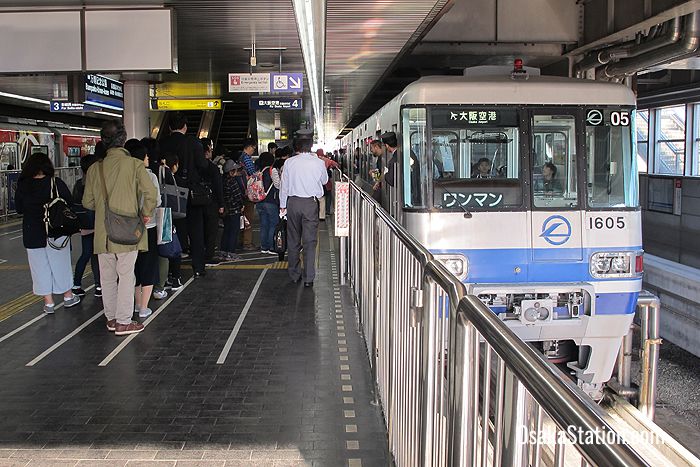 If you are traveling from the Osaka Station/Umeda area then you have a two options when traveling by rail to Osaka Itami Airport. You can take the Midosuji Subway Line from Umeda Subway Station to Senri-Chuo Station and then transfer to the Osaka Monorail. This will take around 48 minutes and the combined fares will cost 700 yen. Alternatively you can take the Hankyu Takarazuka Line from Hankyu Osaka-Umeda Station to Hotarugaike Station and transfer to the Osaka Monorail there. This will take 29 minutes and the combined fares will cost only 420 yen. 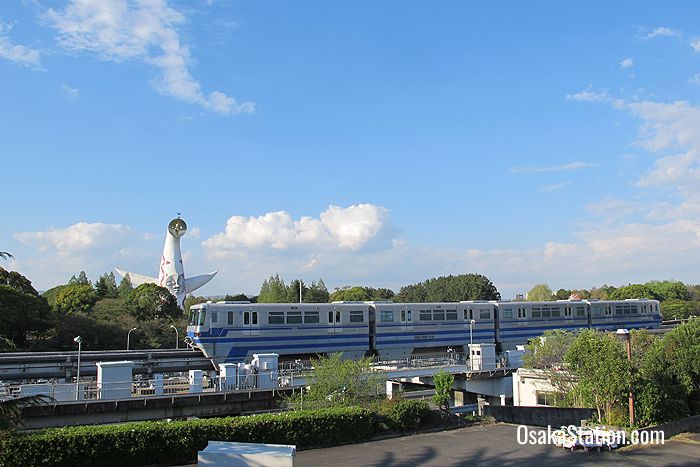 The monorail at Osaka Expo Park

The easiest way to get from Osaka Station to Osaka Expo Park is to take a Midosuji Subway Line service from Osaka-Umeda Station to Senri-Chuo Station and then transfer to the Osaka Monorail for Banpaku-kinen-koen Station. The journey should take around 32 minutes and the combined fares will cost 640 yen. For information on traveling to the park from other areas visit the official Osaka Expo Park website. 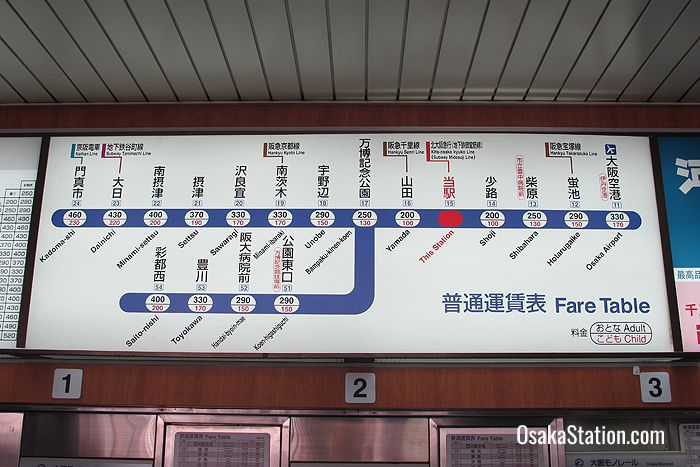 The Osaka Monorail English language website has detailed information on fares, route, and timetables. To quickly work out the best trains, fares, and connections for your journey use English online route finders such as Hyperdia or Jorudan.