Osaka Municipal Subway’s Tanimachi Line runs north to south in Osaka Prefecture connecting the cities of Moriguchi and Yao via the city of Osaka. The line is named after Tanimachi-suji, a major boulevard in central Osaka, under which the subway line passes for much of its course. This line also has a station at Higashi-Umeda which is very close to Osaka Station and convenient for transfers. 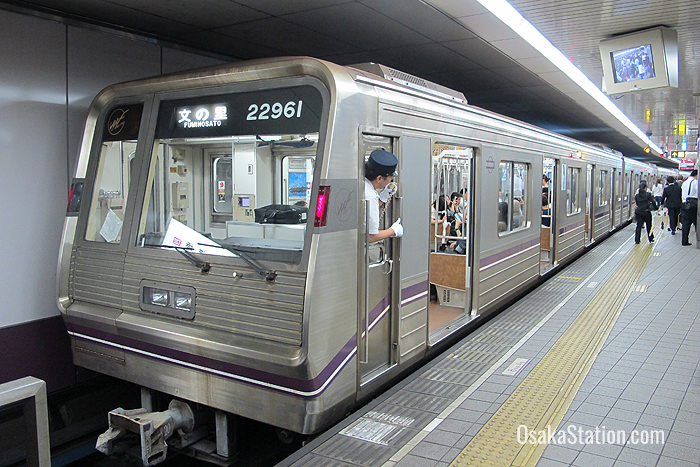 A southbound train at Temmabashi Station

Here, listed from north to south, are the key destinations with transfer points included. Fares and times are given from Dainichi Station.

The Tanimachi Line is color-coded purple

Dainichi Station in the city of Moriguchi is the northern terminus of the Tanimachi Line. Transfer here to the Osaka Monorail Main Line.

Tenjimbashisuji Rokuchome Station is close to Tenjinbashisuji Shotengai, Japan’s longest covered shopping street. Transfers can be made here to the Sakaisuji Subway Line and the Hankyu Senri Line.

Higashi-Umeda Station is one of many stations in Umeda, Osaka’s most popular shopping district. This station is located within the Whity Umeda underground shopping mall. Nearby you can find many more popular attractions and shopping areas such as the Umeda Sky Building, HEP Five, and Grand Front Osaka. You can find maps for the Umeda area at the Umeda Connect website and at the Osaka Info website.

Transfers can be made here to the Sakaisuji Subway Line and at nearby Osaka-Temmangu Station to the JR Tozai Line.

Transfer here to the Keihan Main Line and the Keihan Nakanoshima Line.

Tanimachi Yonchome Station is convenient for Osaka Museum of History and Osaka Castle. Transfer here to the Chuo Subway Line.

Tanimachi Rokuchome Station is convenient for Karahori Shotengai, a historical shopping street that has recently seen a resurgence in popularity for its fashionable boutiques and cafes. Transfer here to the Nagahori Tsurumi-ryokuchi Subway Line.

Tanimachi Kyuchome Station is convenient for Ikukunitama Shrine, Kozu-gu Shrine, and the Sheraton Miyako Hotel. Transfer here to the Sennichimae Subway Line. At nearby Osaka Uehommachi Station transfer to the Kintetsu Namba Line and the Kintetsu Osaka Line.

This station is convenient for Shitennoji Temple, which dates from 593 and is Japan’s oldest Buddhist temple.

Tennoji Station is convenient for Tennoji Park, Tennoji Zoo and Osaka Municipal Museum of Fine Art. You can download a map of the Tennoji area from the Osaka Info website.

This station is within walking distance of Harinakano Station and Imagawa Station which are both on the Kintetsu Minami-Osaka Line.

This station in the city of Yao, is the southern terminus of the Tanimachi Line. It is close to Yao Airport.

Platform signs are written in Japanese and English 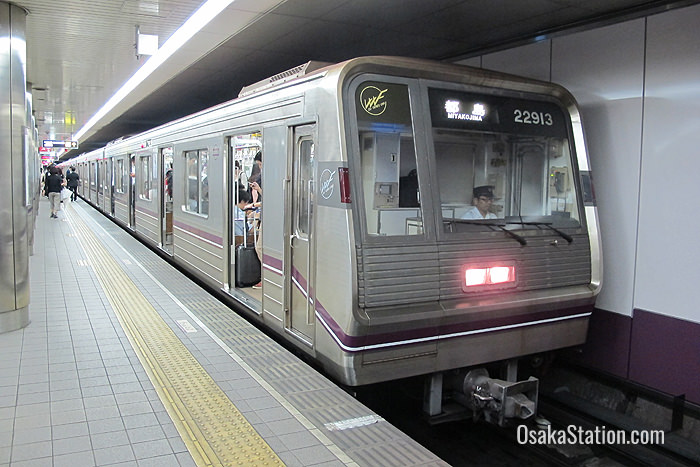 A train bound for Miyakojima