Shitennoji Temple is Japan’s oldest official temple. It was founded in 593 by the prince Shotoku Taishi; a major figure in Japanese history who played a leading role in introducing Buddhism to Japan. He named the temple after the shitenno: four heavenly kings of Buddhist tradition who guard the world from evil. The prince had prayed to these kings during a time of war, and when the war was over he had the temple built in order to give thanks. Though this temple complex has a long history, most of the buildings have been destroyed by fire and rebuilt several times, and several of the current buildings actually date from the 1960s and 1970s. 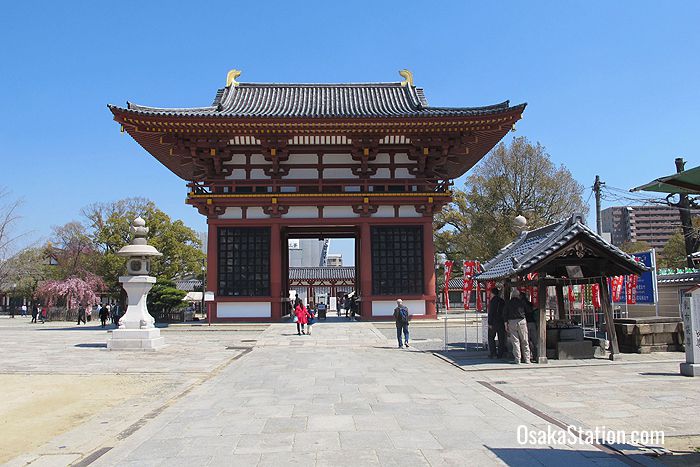 The Gokurakumon or Paradise Gate of Shitennoji Temple

Most of the outer buildings of the temple are free to view, but there are three locations where you will need to pay a fee to enter. These are the Chushin Garan or inner temple complex, the Treasure House, and the Gokurakujodo Garden. The inner complex of the Chushin Garan includes the Kondo or main hall, the Kodo lecture hall, a five story pagoda, and is surrounded by a covered walkway with three gates. You can enter and climb up the pagoda, but you are not allowed to take pictures either inside the pagoda or from the windows at the top.

The fee to enter the Chushin Garan is 300 yen for adults, 200 yen for senior high and university students, and free for children of junior high age or younger. 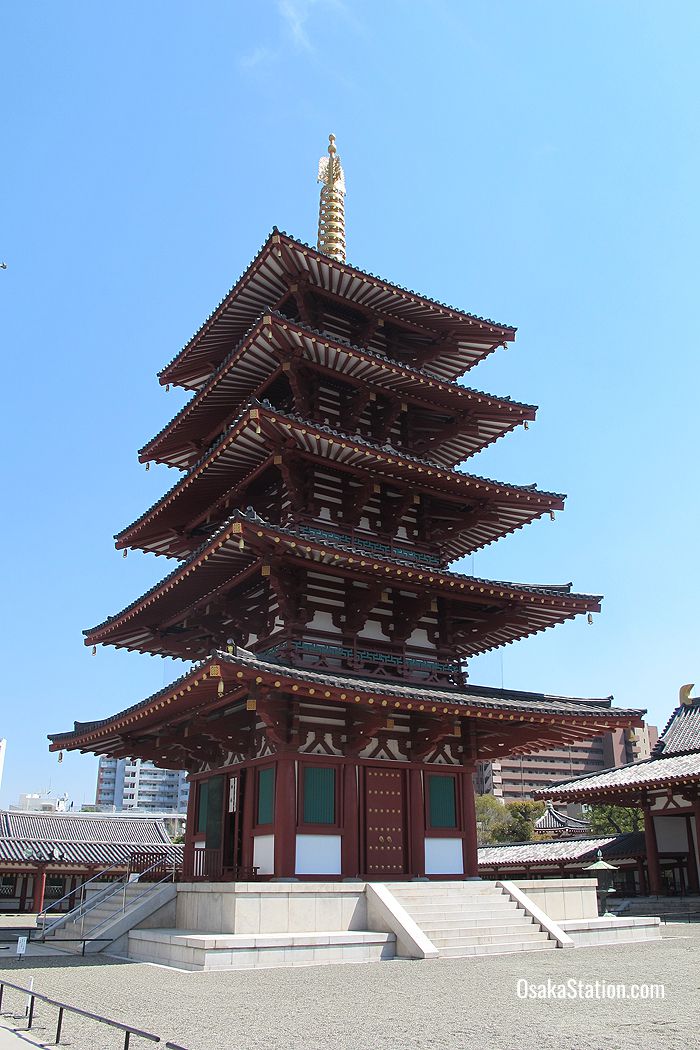 You will also need to pay to enter the Treasure House on the east side of the temple complex. This building exhibits various documents, Buddhist statues, paintings, and sacred artifacts, many of which are registered National Treasures.

The fee for entry is 500 yen for adults, 300 yen for senior high and university students, and free for children of junior high age or younger. 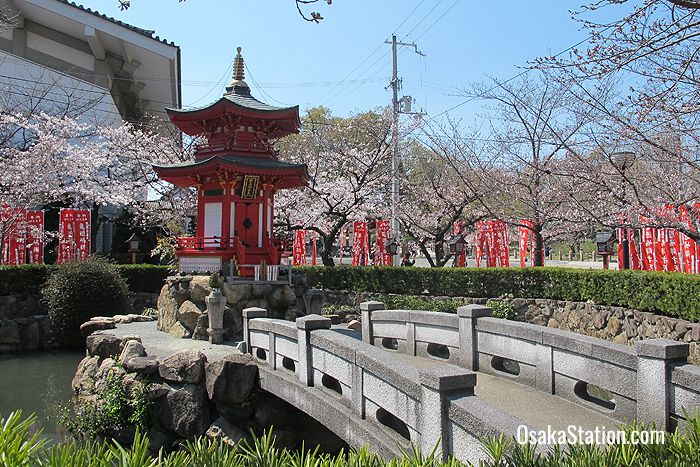 This small shrine behind the Treasure House is dedicated to Benzaiten, the Buddhist goddess of rivers, music, and all things that flow

The Gokurakujodo Garden is named after the Buddhist paradise and is a beautiful and spacious stroll garden with a pond, streams and many cherry trees. 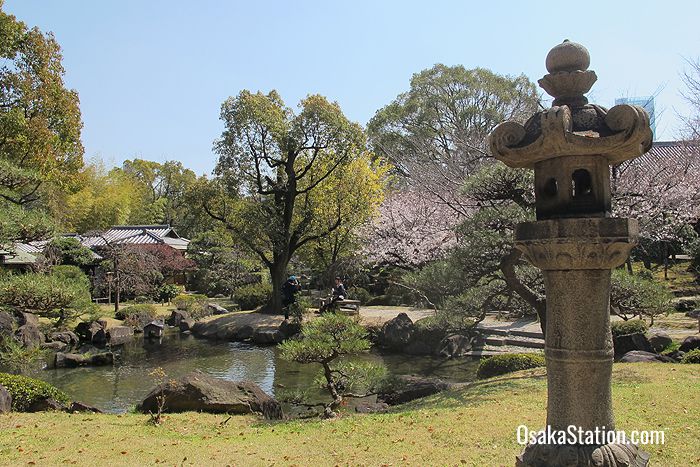 Inside the temple garden

It is located in the north east corner of the temple grounds and the fee to enter is 300 yen for adults, 200 yen for school age or university students, and free for pre-school age children. 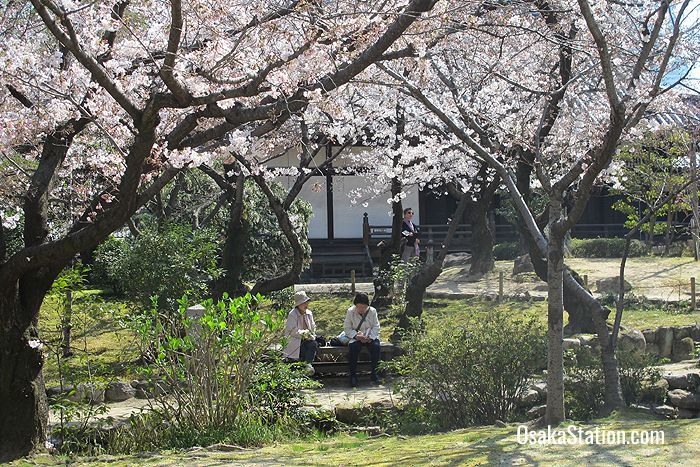 The garden has many cherry trees

A large flea market is held on the grounds of Shittenoji Temple on the 21st and 22nd of each month between the hours of 8.00 and 16.00. This is a lively event and completely free to enter with around 300 stalls selling textiles, ceramics, second hand clothes, antiques, and all kinds of bric-a-brac. There are also plenty of food stalls selling typical Osaka foods like takoyaki, okonomiyaki, and sweet manju buns. 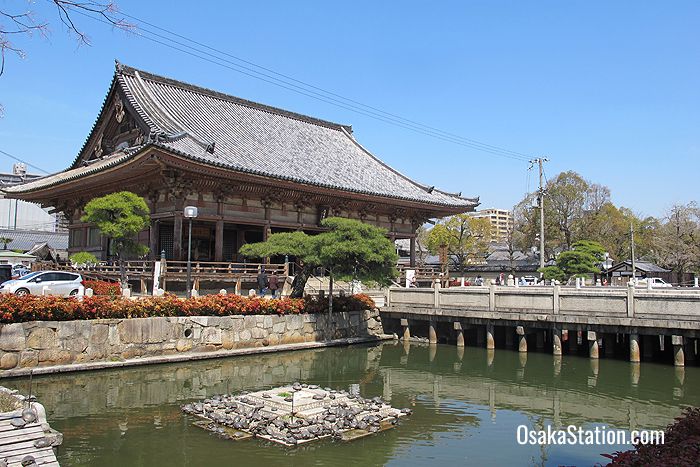 Shitennoji Temple is also the location for the Doya Doya festival which is held on January 14th every year. During this festival teams of young boys wearing only loincloths are showered with cold water as they run into the Rokujireisando prayer hall. Once inside they compete to catch lucky paper charms that are dropped from the ceiling. The team that gets the most charms is the winner! 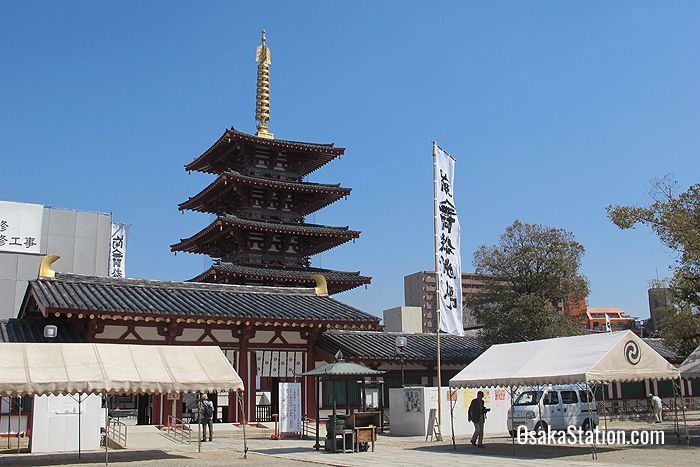 Shitennoji Temple is an 11 minute walk north of Tennoji Station.