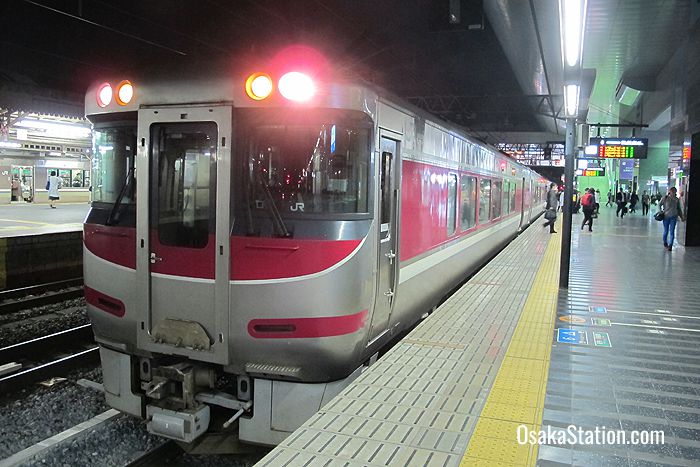 The Biwako Express #2 at Kyoto Station

The Biwako Express runs along the JR Kyoto Line and the Biwako Line and makes limited stops at the following stations.

The key destinations and transfer points are listed below with full fares and example journey times given from Osaka Station.

Kyoto is one of Japan’s best preserved historical cities and has many sites of interest including shrines, gardens, palaces, and museums. Among the major tourist attractions here are the Golden Pavilion of Kinkakuji Temple, Tofukuji Temple, the Byodoin Temple in Uji, and Kyoto Railway Museum.

The most famous temple in the Yamashina area is Zuishin-in which is known for its plum blossom grove and for the colorful Hanezu Odori dance which is performed here on the last Sunday of March each year. Transfer at Yamashina Station to the JR Kosei Line, the Keihan Keishin Line, and the Tozai Subway Line.

To visit Ishiyamadera Temple, transfer here to the Ishiyama Sakamoto Line at Keihan Ishiyama Station and exit at Ishiyamadera Station. The temple dates from 747 and there is a story that the world’s oldest novel, Genji Monogatari ,was written there.

Kusatsu’s main attractions are the Lake Biwa Museum and the Mizunomori Water Botanical Garden. Transfer here to the JR Kusatsu Line which runs as far as Tsuge Station in the city of Iga, Mie Prefecture.

Omi Hachiman has many well preserved traditional buildings and a number of elegant late 19th century and early 20th century buildings that were designed by the American architect William Merrell Vories.

Hikone’s main attraction is Hikone Castle: a listed national treasure and one of only 12 original castles in Japan. A small area to the south of the castle has been rebuilt in a traditional Edo period style and here you can find many galleries, craft shops, and restaurants. Transfer at Hikone Station to the Ohmi Railway Main Line.

Transfer here to Tokaido Main Line services bound for Ogaki and Gifu, the Hokuriku Main Line for Fukui and Kanazawa, the Tokaido Shinkansen, or the Ohmi Railway Main Line. Nearby Mount Ibuki is popular for hiking, climbing, and skiing. In order to reach it, take the Tokaido Main Line and get off at Omi-Nagaoka Station.