Umeda is the northern gateway to Osaka and a prosperous commercial district crowded with glittering tower blocks and a complex network of underground shopping malls. At the heart of this bustling urban center is Osaka Station with its surrounding network of six satellite stations. Three of these satellite stations (the Hanshin, Hankyu and Subway stations) are collectively (and confusingly) known as Umeda Station. This is despite their being located in separate locations and served by different rail companies.

Osaka Station itself is housed in a massive shopping complex and is connected to the other stations by a series of tunnels and walkways. If you are unfamiliar with this area, then it is not difficult to get lost. However, there is so much to enjoy and discover in Umeda, that it is worth taking a little time to familiarize yourself with the local layout before you arrive. In this article we will look at the history of Umeda, as it developed around Osaka Station from the late 19th century to the present day. It is a fascinating history of organic and dynamic growth, that reveals a great deal about the native Osaka temperament; its competitive spirit, and its canny eye for market opportunity. 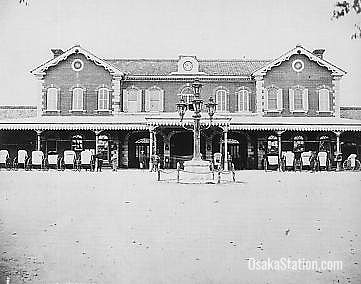 The first Osaka station was opened on May 11th 1874 to accompany the establishment of a railway line between the cities of Osaka and Kobe. A Western style red brick building just two stories high, it was situated a little further to the west of the current station, closer to where Osaka Central Post Office stands today. It is hard to imagine now, but at that time the Umeda area was mostly rice fields, with just a few scattered residences and it was not even a part of the Osaka municipality. However, in choosing this rural location the city fathers showed great foresight. The original plan had been to build a smaller station with a dead end bay platform further south in the more urban location of Dojima. This would have been closer to the city’s river transportation network, and just two years before, Japan’s first railway station in Yokohama had been built with the same style of bay platform. However, in order to allow for the line’s eastward expansion, it was decided to adopt a through station design, and for that more space was required. Choosing both this through station design and the more open Umeda location would prove crucial to the development of the station as it became an important hub in the expanding national network of railways. In fact, just two years after Osaka Station was established the line was expanded east to connect with Kyoto. 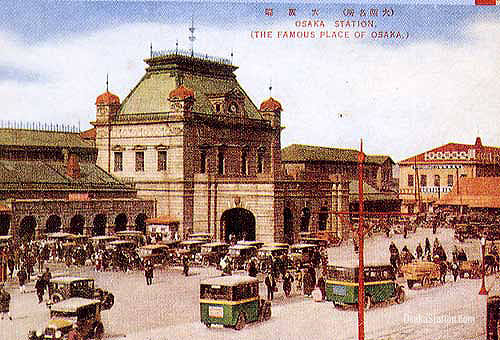 Osaka Station made Umeda the city’s principal transportation hub, and as the area prospered, both passenger and freight transport increased. At the turn of the century it became clear that new facilities would be needed. To connect the station with the municipal tramline, a broader station front plaza was also necessary, so in 1901 Osaka Station was moved to its current location and housed in a grander stone clad building. This new station building became a famous landmark and was renowned as one the three great modern buildings in Osaka, along with the Osaka Branch of the Bank of Japan built in 1903, and the Japanese Mint’s Senpukan building built in 1871 (both of which still survive). The second station building was dismantled in 1935, to make way for a more modern design, but it wasn’t completely demolished. Instead, the building’s materials were shipped east and reassembled in Tokyo, where the building housed a school for girls until it was finally destroyed in the 1940s during a war time air raid. 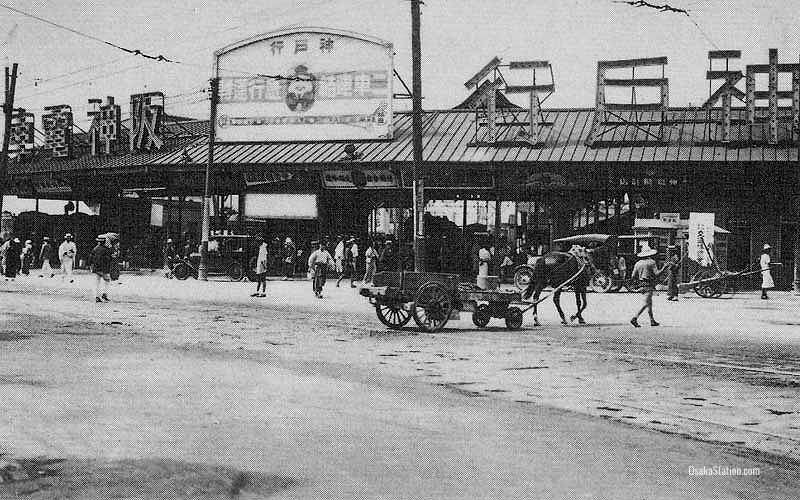 In Osaka station’s early days it was familiarly known as “Umeda Eki” or “Umeda Sutensho” (“Umeda Station” in the Japanese approximation of English at the time). This ceased to be the case though, as more railway companies were attracted to the area and built their own “Umeda” terminals. The first major challenge to Osaka Station’s predominance was the Hanshin Osaka-Umeda Station which opened on December 21st 1906. By that time, many of the country’s major private railways had been nationalized and Osaka Station lay at the hub of several government run rail lines. Hanshin Electric Railway found a new outlet for competitive private enterprise however, by applying for permission to build a tramline between Osaka and Kobe. This new line (now the Hanshin Main Line) was in direct competition with the government run Tokaido line, and would never have received official permission if it had been opened as a railway. However, by calling the new route a “tramline” the Hanshin company could circumvent the problem by applying to a different government department. In fact, only a part of the line needed to run along public roads for it to qualify as a tramline, and the official speed limits for trams were routinely ignored from the beginning, so for all intents and purposes this was a railway. In contrast to the Tokaido which followed a direct route between Osaka and Kobe, the Hanshin Main Line was deliberately designed to follow a more convoluted course, so that it could reach more potential passengers. This earned the railway the nickname “Curve Company” and made for a longer journey time, but fares were cheaper and services were more frequent and the new line was a tremendous success. The line opened in 1905 and was extended to Umeda in 1906. In the following years many other railway companies, including Hankyu and Keihan, would copy the Hanshin loophole to open their own intercity railway lines. 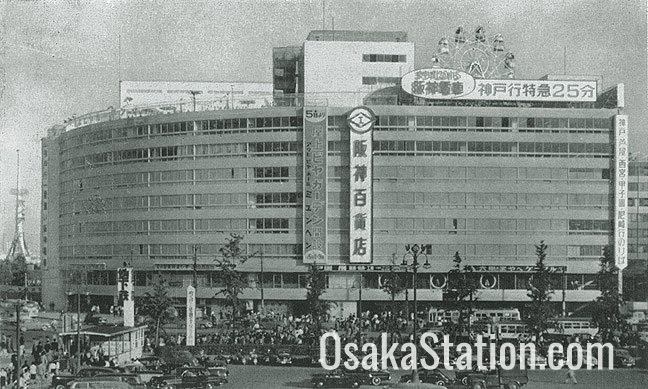 Today Hanshin Umeda is an underground station located directly to the south of Osaka Station, beneath the Daihanshin building. Originally Hanshin Osaka-Umeda Station was situated further to the west in the location now occupied by the Herbis Ent building. It was moved to its current underground location in 1939. Though the Daihanshin building’s outward appearance has remained largely unchanged since the late 1950s, large scale renovations began in 2015 that are due to be completed by 2022. 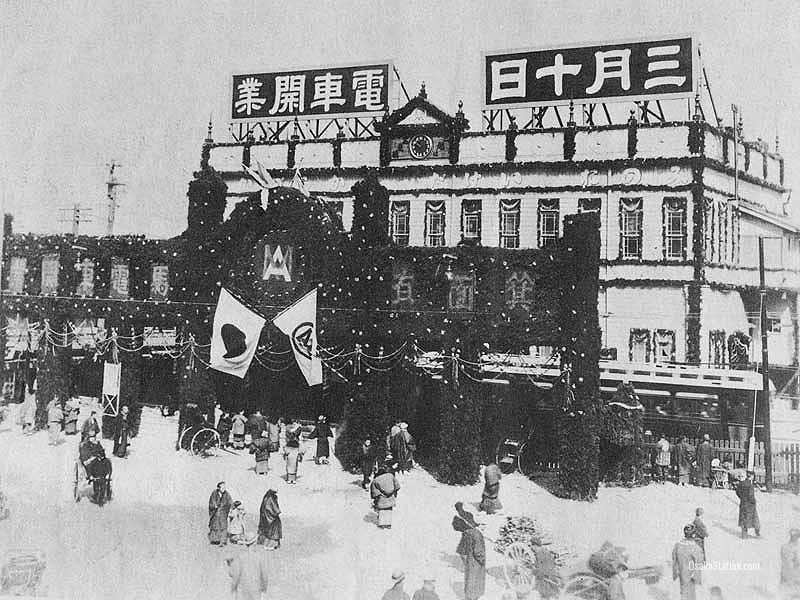 The first Hankyu Osaka-Umeda Station was opened by the Minoo Arima Electric Tramway Company on March 10th 1910. This company, which was later renamed the Hankyu Corporation, followed the example set by Hanshin Railways, by setting up its own inter-urban tramline between Umeda and Takarazuka in Hyogo prefecture. In the coming years, the intense rivalry between the two companies would become famous, with both Hanshin and Hankyu setting up their own competing department stores and baseball teams. 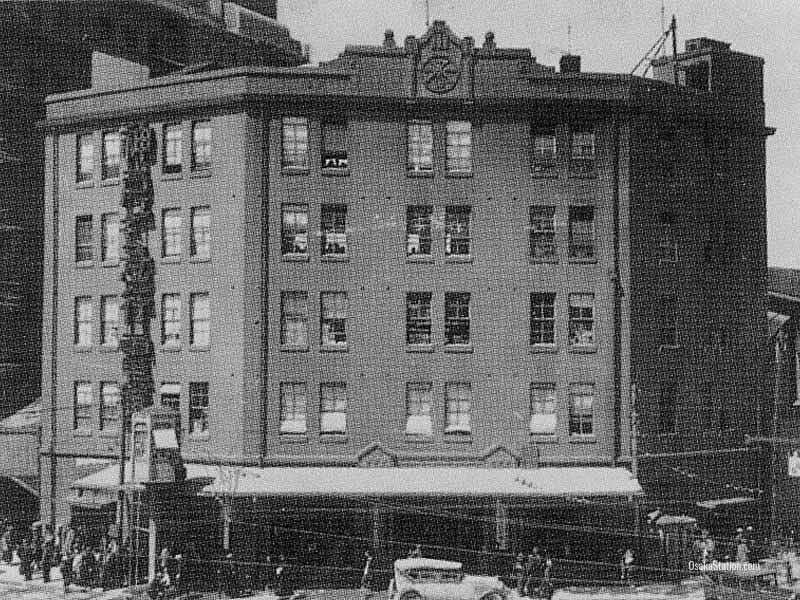 Hankyu Osaka-Umeda Station’s major historical contribution to Umeda’s development though, is in developing the original business practice of partnering railway stations with department stores. Having leased the first floor of the station building to the Shirokiya retail company in 1920, Hankyu established its own “Hankyu Mart” in 1925. This was again redeveloped into the 8 story Hankyu Department Store in 1929. Boasting the best quality products at the cheapest prices, the store was incredibly successful and was repeatedly enlarged between 1931 and 1969. In 1971 the station itself moved to a site north east of Osaka Station, but the department store remains at its original site directly opposite its old competitor, Umeda Hanshin Station. In 2006 the old rivalry ended when the two companies were merged, and between 2005 and 2012 the Hankyu Department Store underwent extensive renovations. It has now moved away from its old mass market image towards more high class international brands. However, the store remains a famous Umeda landmark and Hankyu’s successful pairing of a railway station with a department store has been widely copied throughout Japan. This business model can perhaps be seen as having reached its zenith with the giant Osaka Station City shopping complex that now houses Osaka Station. 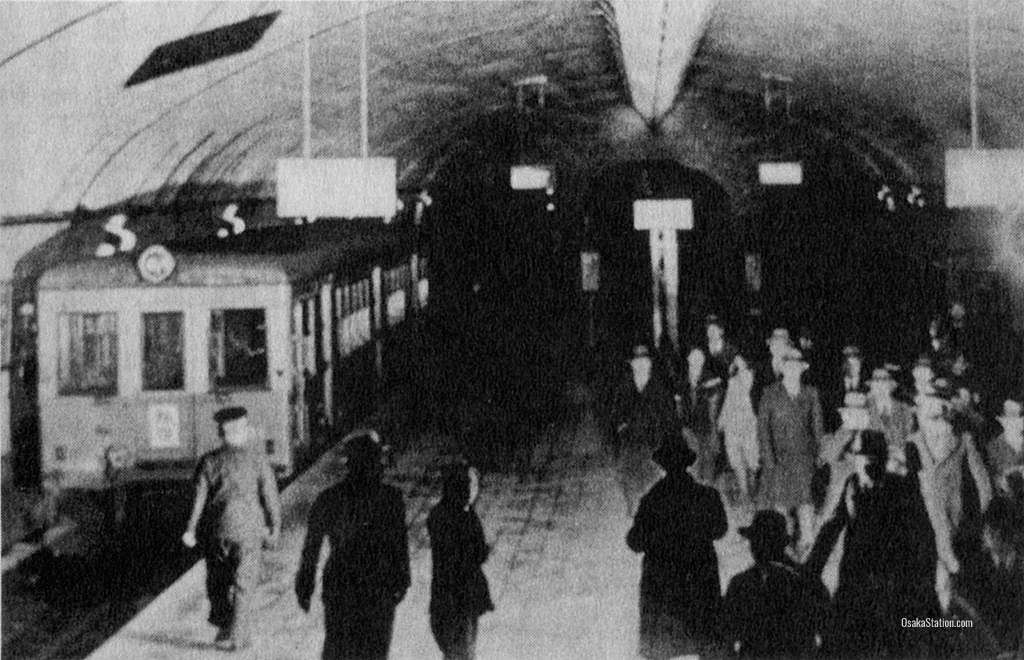 Yodoyabashi Station on the Midosuji Subway Line in 1933

Umeda Subway Station was first opened as a temporary station on May 20th 1933, together with the opening of the Midosuji Subway Line. This was Osaka’s first subway line and was built to stimulate the local economy and provide employment for those who had lost work during the recession. Initially running between Umeda and Shinsaibashi, this line now runs north-south through many of Osaka’s most important transportation hubs and tourist locations. 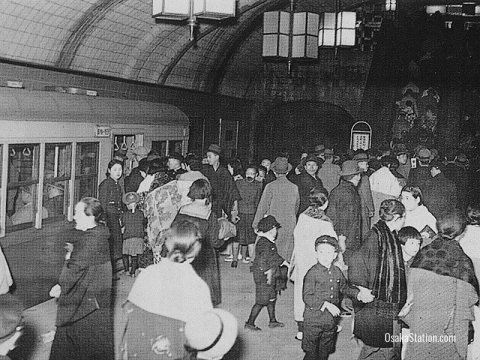 Umeda Subway Station was moved to its current location, east of Osaka Station, in 1935. In 1965 it was joined by Nishi-Umeda Subway Station, which was opened to serve the extension of the Yotsubashi Subway Line. Then in 1967, Higashi-Umeda Station was opened to serve the Tanimachi Subway Line. All three of these subway stations are closely connected by underground walkways, so it may be easier to think of them as one station with three separate lines. 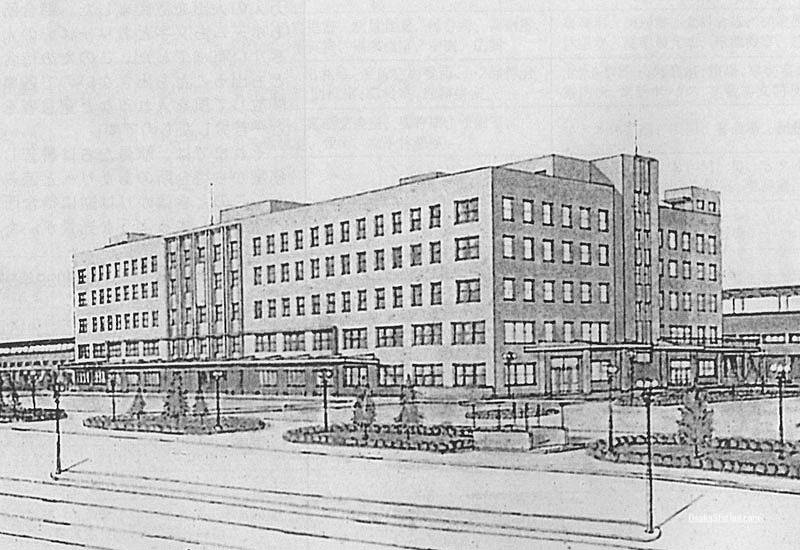 The original design plan for the third Osaka Station building

The opening of the third Osaka Station was planned to coincide with the Tokyo Olympics which were scheduled to take place in the summer of 1940. Originally designed as a five story building with a hotel to occupy the top 3 floors, it was meant to have an imposing, modern, international appearance. Unfortunately, the outbreak of World War 2 led to both the cancellation of the Tokyo Olympics and the drastic modification of the station’s building plans as the army confiscated most of the steel needed for construction. The station was opened in an incomplete state on June 1st 1940 and except for the central part of the building the upper floors were never completed according to the original plan.

The station’s appearance in 1940 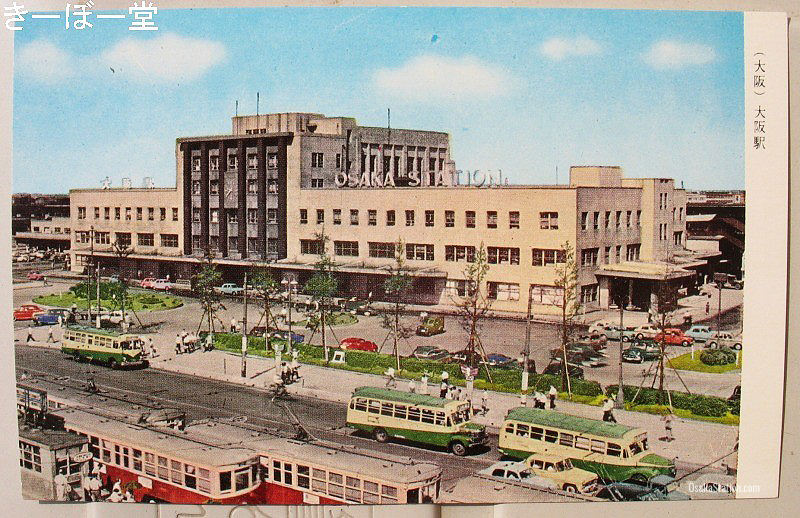 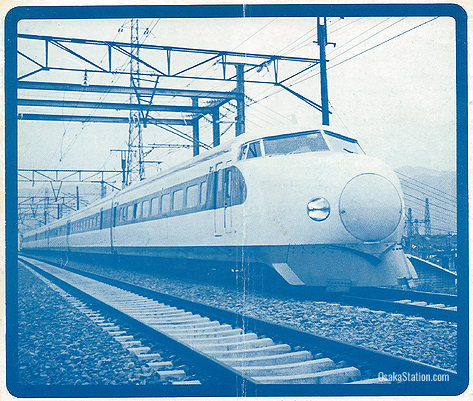 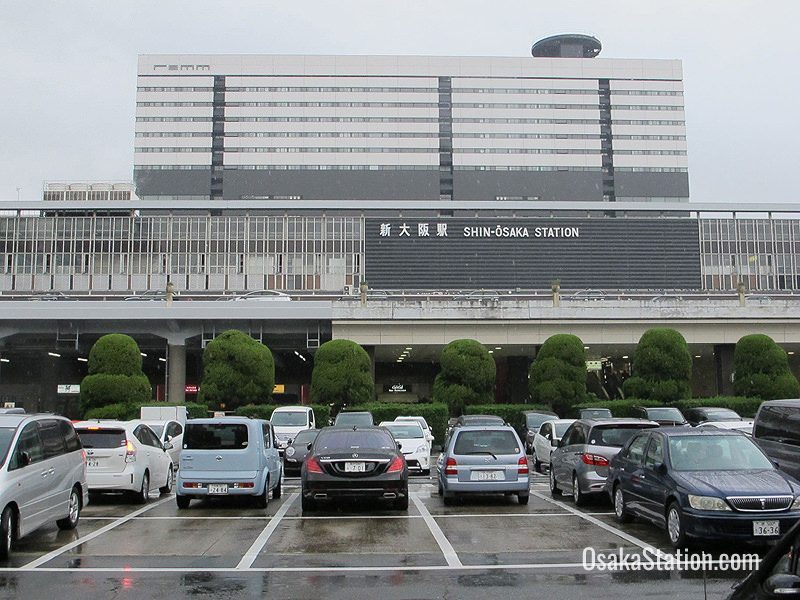 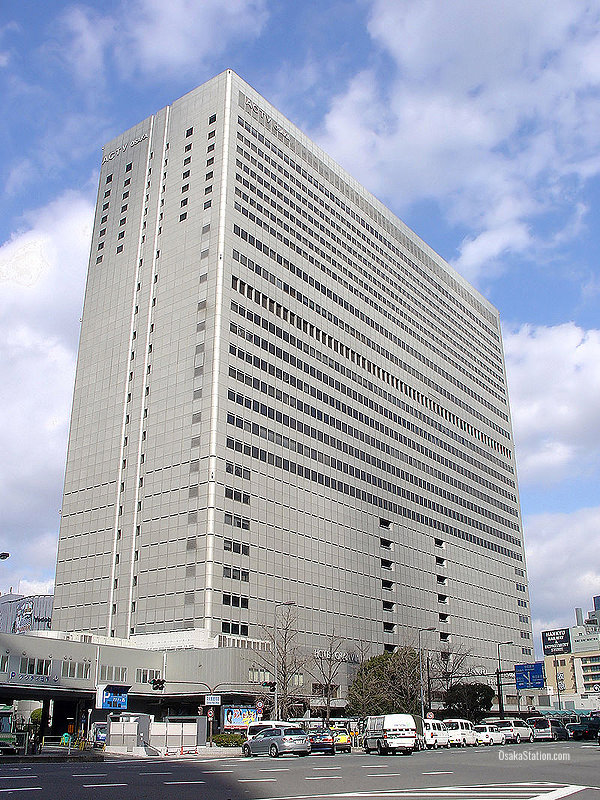 The fourth Osaka Station building opened on December 15th 1979. At this time the station was still run by Japanese National Railways (JNR) and this national network had long been suffering from serious financial difficulties. In Osaka, to help offset JNR’s debts, they followed the precedent set by Hankyu Railways back in 1929, and built a 27 story department store in the terminal building that stood over the station. This was the Acty Osaka department store which opened in 1983. The store was successful, but JNR’s debts were overwhelming and the national network was privatized to form the JR Group of railways in 1987. Osaka Station is now run by JR West. 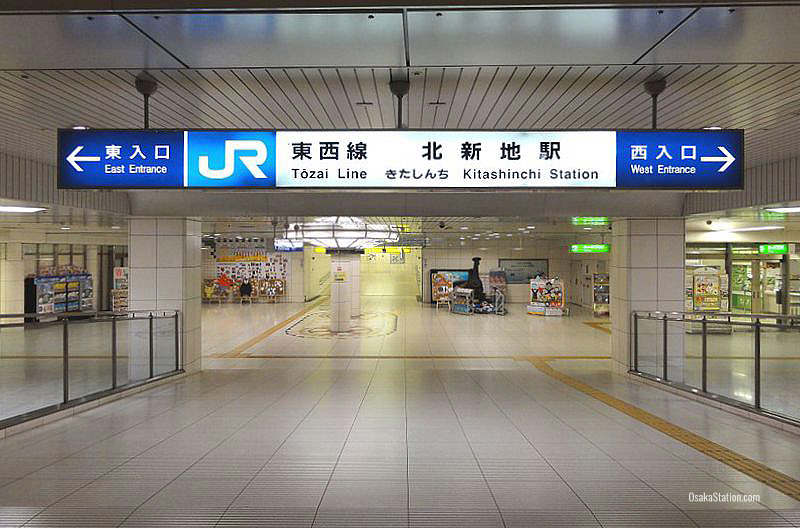 The latest addition to the satellite stations surrounding Osaka Station was Kitashinchi Station which opened on March 8th 1997. This station is located due south of Osaka Station and serves the JR Tozai Line which runs between Kyobashi and Amagasaki. Though this is a separate station from Osaka Station it is connected to it by an underground walkway, and with the correct ticket or through pass it is possible to make free transfers between these two stations. 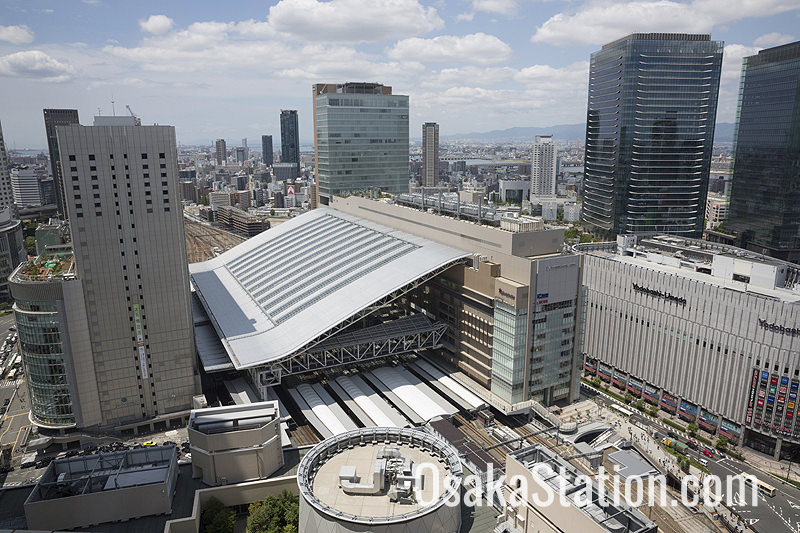 Between 2007 and 2011 the Osaka Station building underwent extensive reconstruction. Acty Osaka was expanded, renovated and renamed the South Gate Building. A new North Gate Building was opened in 2011, and the two buildings were linked by a new concourse over the railway tracks that are now covered by a dramatic glass domed roof. Rebranded as Osaka Station City, this new station complex contains shops, restaurants, a cinema, a sports center and roof top gardens. Practically a tourist attraction in itself the station now stands at the center of a vibrant, modern commercial district buzzing with seemingly endless shopping, dining, and nightlife opportunities. Beneath this bright, modern surface however, is buried a 140 year old story of shrewd commercial enterprise and innovation that transformed a rural backdrop into Osaka’s preeminent urban center, and all of it was inspired by the coming of the train.