The Hankyu Kobe Main Line is an important commuter line linking the two cities of Osaka and Kobe. The line runs between Hankyu Osaka-Umeda Station in Osaka and Hankyu Kobe-Sannomiya Station in Kobe. 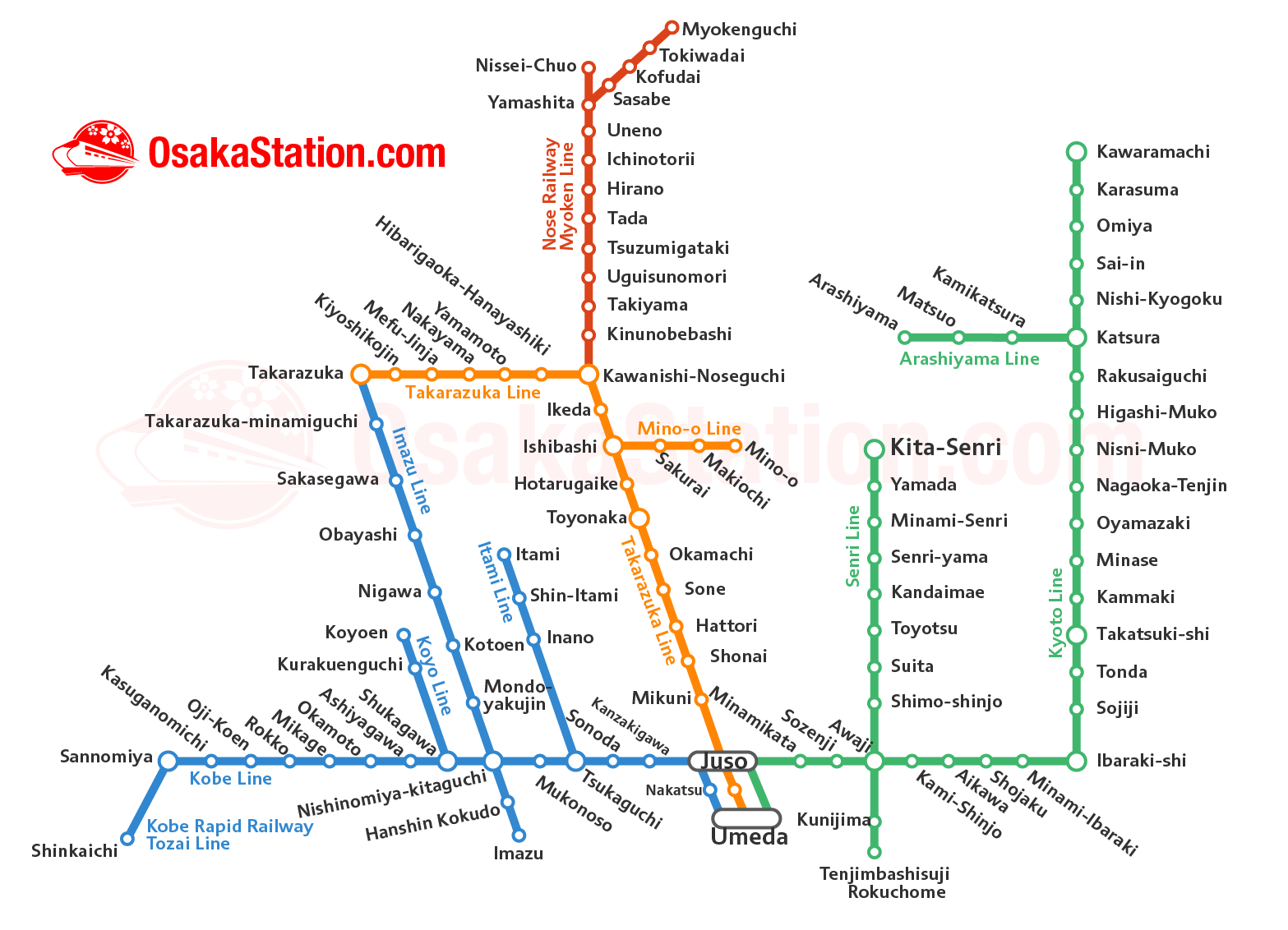 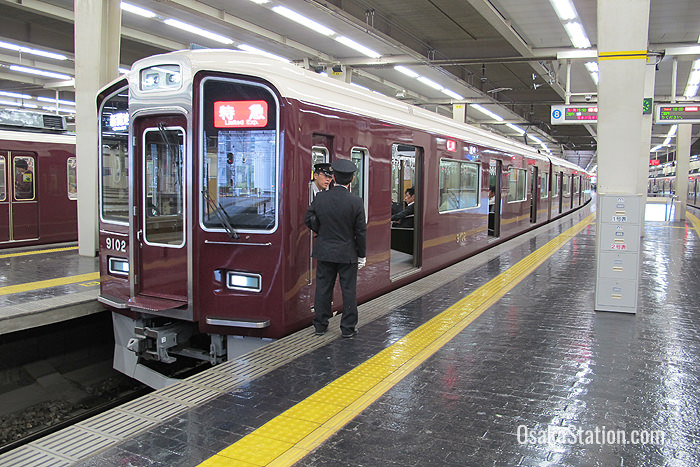 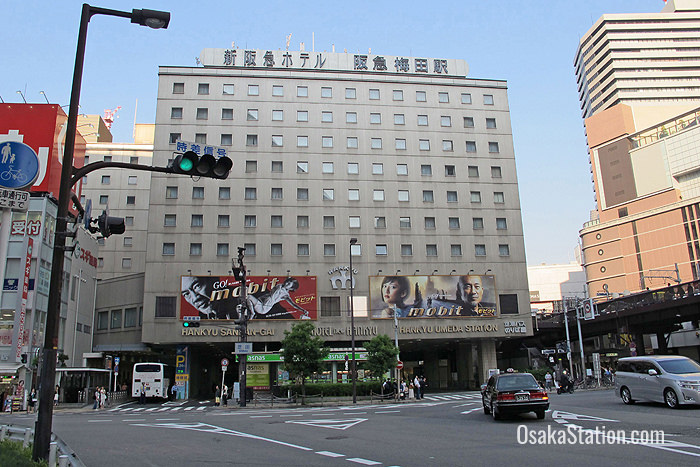 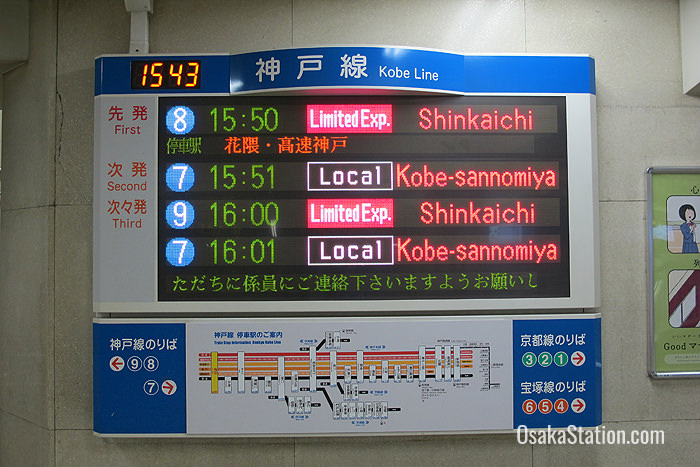 In Osaka-Umeda Station Kobe Line trains stop at platforms 7, 8 and 9

Below are the main stations you are likely to visit on the Hankyu Kobe Main Line. Fares and train times are given from Hankyu Osaka-Umeda Station.

At Juso Station you can transfer between the three main Hankyu railway lines. Passengers for Kobe who are traveling via the Kyoto Line or Takarazuka Line, should transfer here to the Kobe Line.

Exit here for the popular sightseeing and hiking area of Mount Rokko. Buses from the station take passengers to the Rokko Cable Car which will take you up Mount Rokko. At the top you can enjoy an observation deck with spectacular views, terrace dining, an alpine botanical garden and a musical box museum!

Oji-Koen Station is convenient for Kobe city’s Oji Zoo which is best known for being the only zoo in Japan that has both pandas and koalas.

Kobe Sannomiya Station is the main terminal for people visiting Kobe City, as it gives immediate access to Kobe’s main area of business, shopping and entertainment. Kobe itself is an attractive cosmopolitan port city. Its main attractions are Chinatown, Kobe Harborland, Meriken Park, and the Ijinkan, an area of foreign houses built in the 19th century.

In addition to the Hankyu Kobe Main Line there are two other competing rail lines that connect Osaka with Kobe: the JR Kobe Line and the Hanshin Main Line. All three of these lines have stations both in Umeda and Sannomiya that are within a short walking distance of each other. Let’s compare their services.

The JR Kobe Line provides the fastest service between Osaka Station and JR Sannomiya Station at 22 minutes by Special Rapid Train. It is also the most expensive service at 410 yen. However, this line is covered by the Japan Rail Pass. Because the Hankyu and Hanshin Railways are private railway companies you cannot use the Japan Rail Pass on their lines.

A Limited Express on the Hanshin Main Line will get you from Hanshin Osaka-Umeda Station to Hanshin Kobe-Sannomiya Station in approximately 33 minutes for 320 yen. This is cheaper than the JR service but pretty much the same as a Limited Express on the Hankyu Kobe Line which covers the same distance in roughly 32 minutes for 320 yen. There isn’t really much to choose between the two private lines, but in Kobe the Hanshin station is slightly better positioned for areas to the south of Kobe-Sannomiya, and the Hankyu station is a little more convenient for areas to the north. 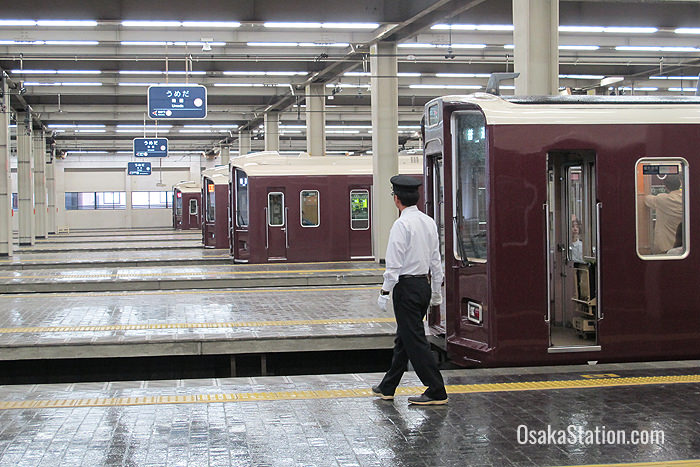 An inside view of Hankyu Osaka-Umeda Station

As the Hankyu Railway is a private company it is not covered by the Japan Rail Pass. However, a Hankyu Tourist Pass is available for 1 or 2-day travel. This might be worth your while if you are planning to use Hankyu Railways between Osaka, Kyoto and Kobe.

Visitors from overseas can also get a Kansai Thru Pass (also called the Surutto Kansai Pass) for two or three days. This covers not only the Hankyu Railway but many of the private railways, buses and subway systems in Osaka, Kyoto, Kobe, Nara and Shiga. This pass cannot be used on JR Railways however. Visit the Kansai Thru Pass website to find out more. 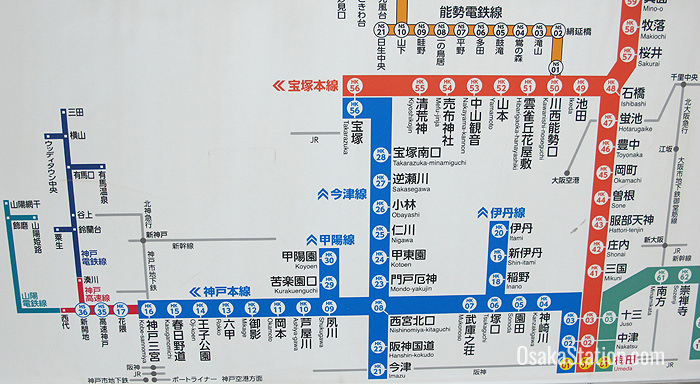 The Hankyu Railway is served by a variety of train types. The main ones are the Local trains, the Semi-Express, the Express, the Rapid Express and the Limited Express. The Local trains are the slowest because they stop at all stations, and the Limited Express trains provide the fastest service, but they may not stop at your station. You should be careful to get on the right train for your stop, or know where to make an appropriate transfer. To get to either Rokko Station and Oji-Koen Station for example, you may need to make a transfer en route between a Limited Express train and a Local train. Fortunately the official Hankyu website has a clear and simple English language PDF guide to all the train types on the Kobe Line. This includes a color-coded route map showing exactly which stations each train stops at. You can find out where to make a transfer using an English language online route finder like Jorudan or Hyperdia.

You can also get a bilingual map of the complete Hankyu Railway network. On this map the Kobe Main Line and its branch lines are colored blue.