Miyajima is one of Japan’s most scenic locations; a small, mountainous, forested island in the Inland Sea. The view of it as one approaches from the sea is said to be one of the three best views in Japan. 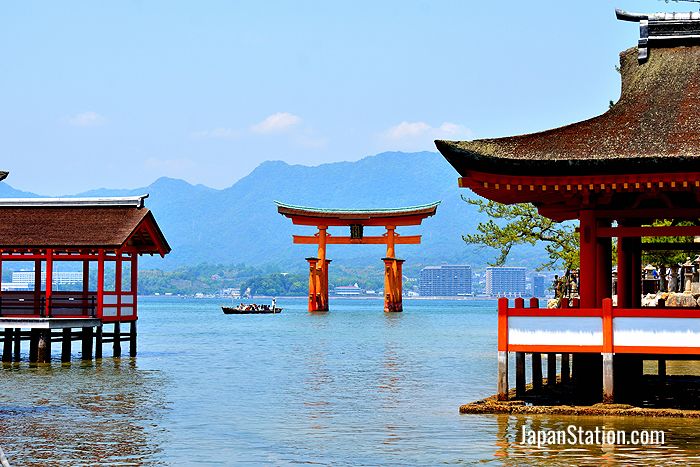 A view from Miyajima of the floating tori gate

Although the real name of the island is Itsukushima, it is popularly known as Miyajima, which means “Shrine Island”. This popular name comes from the most famous location on the island: Itsukushima Jinja Shrine and its vermilion torii gate which appears to float on the sea.

Miyajima Island is well connected to Osaka by public transport networks. A variety of travel options, including train, bus, car, and ferry, are listed below. 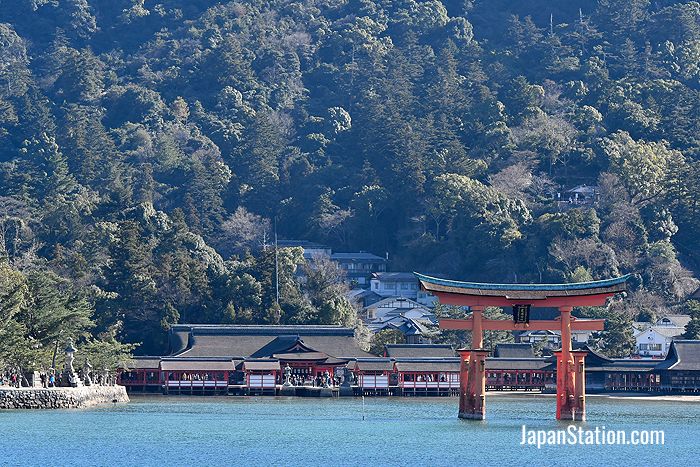 Itsukushima Jinja Shrine is the main attraction on Miyajima. A UNESCO World Heritage Site it is believed to date from the year 593. The Great Torii standing in the sea in front of the shrine was a sacred entrance for people who arrived on the island by boat. During high tide it appears to float on the water, but during low tide you can walk out to it. Around the shrine and in other parts of the island you will see many wild deer. These animals are considered sacred to the gods and so are allowed to come and go as they please. They are quite unafraid of humans but as they are still wild animals it is best not to trouble them. 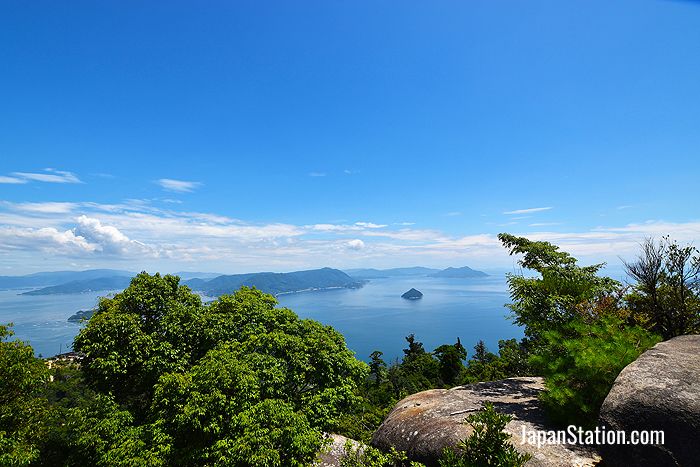 The view from Mount Misen

Other sites of interest on Miyajima include Senjokaku which is the largest building on the island and dates back 1587, and the nearby Gojunoto (Five Storied Pagoda) built in 1407. Look out also for Daishoin Temple which dates from the 12th century, Daiganji Temple which is said to date from the 13th century, and the Miyajima History and Folk Museum. All of these locations are in easy walking distance of Itsukushima Jinja Shrine. The Miyajima Tourist Association have a series of printable guide maps to help you find your way around. 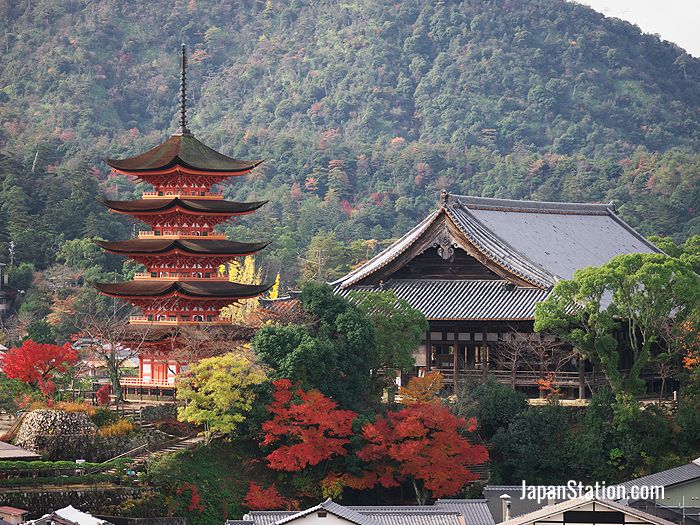 When traveling by public transport from Osaka to Miyajima, you will most likely travel to Hiroshima first. And because it is a long journey, many travelers will combine a trip to Miyajima with a sightseeing stop in Hiroshima City. From Osaka to Hiroshima you have three travel options: you can go by regular JR trains, by shinkansen, or by bus. From Hiroshima you can then transfer to local train or tram services as far as Miyajimaguchi Station where you will take a ferry to the island. There are two ferry services at Miyajimaguchi: JR and Matsudai. It is also possible to take a ferry directly from Hiroshima Port to Miyajima island.

If you have a Japan Rail Pass your best option is to take the shinkansen to Hiroshima Station, transfer there to the JR Sanyo Main Line for Miyajimaguchi Station, and then use the JR ferry. All three of these services are covered by the Japan Rail Pass and you could be on Miyajima in as little as 2 hours and 30 minutes. For planning journeys on either the shinkansen or regular JR lines we recommend the JR West Timetable & Route Finder.

Miyajima is a good day trip destination from Hiroshima, but staying the night at one of the island’s hotels is also an option. The island is quieter in the evening after the day trippers have left, and your trip will be more relaxed if you don’t have to worry about catching the last ferry.

Traveling by car from Osaka to Hiroshima is also an option. Full details of all these travel options are listed below.

Traveling by Shinkansen from Shin-Osaka to Hiroshima

Sanyo Shinkansen services run from Shin-Osaka Station to Hiroshima Station in 80 – 90 minutes depending on the service. An unreserved seat will cost 9,710 yen. The fare for reserved seats changes with the season but you can expect to pay around 510 yen on top of your regular fare. Seat reservations on the Sakura service are also cheaper than reservations on the Nozomi or Mizuho services. Please note that of the services that run from Shin-Osaka the Japan Rail Pass does not cover the Nozomi or the Mizuho.

Traveling by JR Trains from Osaka to Miyajima

Traveling by regular JR Train services from Osaka Station you can go to Miyajimaguchi Station without transferring at Hiroshima Station (unless you want to). However the journey is quite long and could involve between three to five transfers on the way. Travel times vary between 6 hours and 6 hours and 40 minutes for a fare of 5,940 yen. From Osaka Station take the Special Rapid service on the JR Kobe Line as far as Himeji Station and after that you will probably have to use local trains on the JR Sanyo Main Line. Use the JR West Timetable & Routefinder to find the best route for your departure time.

Traveling by Bus to Hiroshima

For more details about bus services from Osaka see our article Intercity Highway Buses from Osaka.

Traveling by JR Train from Hiroshima to Miyajimaguchi

From Hiroshima Station you can take the JR Sanyo Main Line direct to Miyajimaguchi Station. It takes 28 minutes and costs 410 yen.

Hiroshima Electric Railway (called “Hiroden” for short) run trams on tramline #2 from Hiroshima Station all the way to Hiroden Miyajimaguchi Station. Hiroden Miyajimaguchi Station is right beside the ferry port. The tram takes 69 minutes and costs 280 yen. This is a pleasant way to make the journey, but please note that Hiroden trams are not covered by the Japan Rail Pass.

Traveling by Ferry from Miyajimaguchi

Ferries from Miyajimaguchi take 10 minutes to reach Miyajima. Of the two companies that run ferries Miyajima Matsudai Ferries and JR West Miyajima Ferry both run regular services every 15 minutes and more during peak periods. However, the course of the JR West Miyajima Ferry runs closer to the Great Torii and so makes for a better sightseeing and photographic opportunity. JR ferries also start earlier and run later.

Traveling by Ferry from Hiroshima Port

Setonaikaikisen run regular high speed ferry services between Hiroshima Port and Miyajima which take about 30 minutes. The fare is 1,850 yen and 930 yen for children. For more details visit the Setonaikaikisen website.

There are also round-trip lunch and dinner cruises that sail by the island while you enjoy a meal. However, because they are round-trip cruises they don’t leave anytime for sightseeing on the island. The lunchtime cruise does stop briefly at the island so you could get off there and return by a normal ferry later on. This might not leave you much time for you to enjoy your meal though. The dinner cruise does not stop at the island. Lunch cruises cost between 7,000 and 11,000 yen depending on the menu. Dinner cruises cost between 9,000 and 15,000 yen. For more details see the Ginga Cruise website.

Traveling by car from Osaka to Miyajima could take around 4 hours and 30 minutes or 5 hours depending on traffic conditions. The cheapest route will cost you just under 8,000 yen in toll fees and goes via the following roads:

The fastest route will cost you just under 10,000 yen in toll fees and will save you about 20 minutes of travel time. This route goes via the following roads:

The island of Miyajima is not so suitable for drivers. Roads are narrow, speed limits are strict, vehicular access to different parts of the island is limited, and there is no public parking. Unless you have accommodation booked on the island and they have guaranteed you a parking spot, you are probably better off leaving your car at one of the parking lots by Miyajimaguchi. There are a few parking lots within walking distance of the ferry port. However, to be absolutely sure of a parking spot, you may even consider leaving your car at Hiroshima instead and taking one of the travel options above for the rest of the journey.