Takayama is a beautiful town in the mountains of northern Gifu Prefecture which is famous for its well-preserved historic townscape. Among this destination’s popular attractions are its temples, museums, and hot springs, its many traditional wooden merchant buildings, and a major festival which is held in spring and fall. In winter Takayama is also a popular for the many ski resorts in the surrounding mountains. Takayama is easily reached from Osaka by train, bus and car. 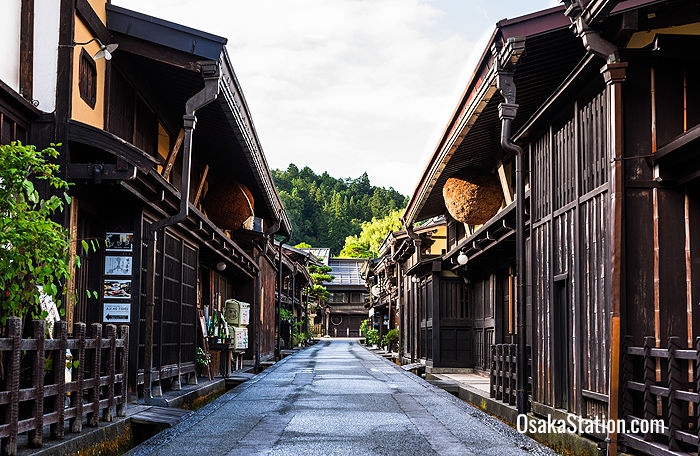 The Old Town in Takayama

The Old Town in the Sanmachi Suji District is the old merchant area of Takayama, and its picturesque streets are lined with traditional wooden houses, inns, and sake breweries, many of which date back to the 19th century. Many of the buildings have been repurposed as craft shops, galleries, museums, restaurants and cafes. This area is a 12 minute walk from Takayama Station. 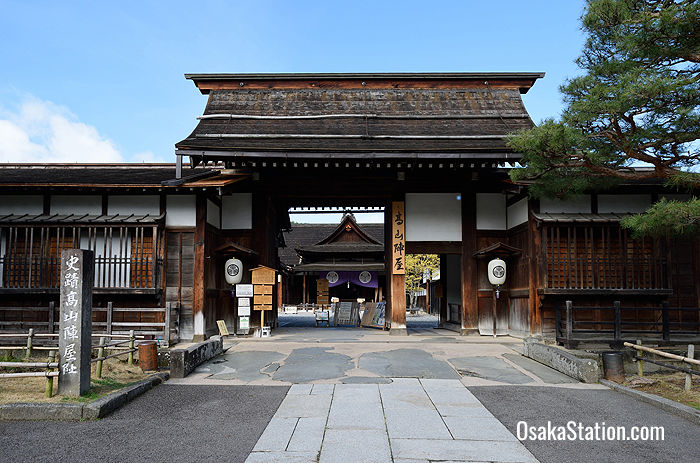 Takayama Jinya is a historic local government office which dates back to the Edo era. In use until 1969 it is now open as a museum. The current main building dates from 1816, but the first office here was built in 1692. There is also a large rice granary beside the main building that was first built for the former Takayama Castle in the early 17th century, and then moved to its current location in 1695.

Free English tours are available of the main building and its restored interiors, and the granary is now used to display artifacts that belonged to the old regional governors. Takayama Jinya is located 5 minutes from Sanmachi Suji and 10 minutes from Takayama Station. The entry fee is 430 yen for adults and free for senior high school students and younger. The museum is open from 8.45 and closes at 17.00 between March and October and at 16.30 between November and February. It is closed between December 29th and January 1st. 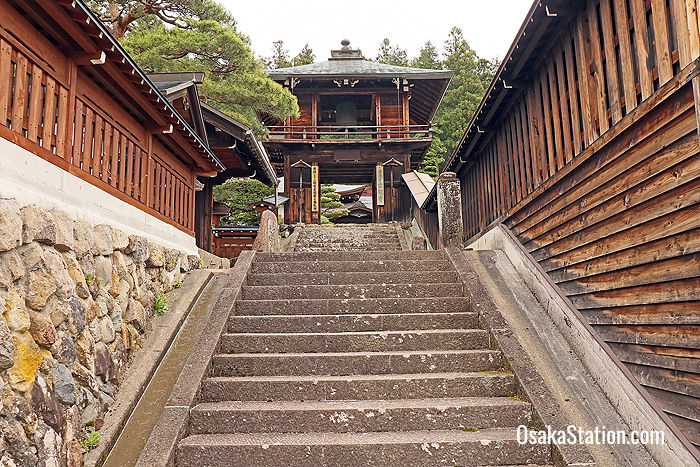 The Higashiyama Walking Course is a scenic 3.5km route which passes through the old temple district of Takayama and continues to the ruins of Takayama Castle in Shiroyama Park. The way is well sign-posted in English and Japanese and the official start point is close to Unryuji Temple which is a 17 minute walk from Takayama Station, and 10 minutes from Sanmachi Suji.

Takayama’s Morning Markets take place every day from 7.00 am in spring and summer and 8.00 am in fall and winter. These energetic markets are held in two locations: one in front of Takayama Jinya, and the other on the banks of the Miyagawa River. The market at Takayama Jinya is a farmers’ market that has been going for 300 years, and here you can find an array of fresh fruit, vegetables, and pickles. At the Miyagawa Market you can find also find fruit and vegetables, but also spices, sweets, souvenirs and handicrafts.

Takayama Matsuri is a festival held twice a year in the spring and fall. The spring festival is held on April 14th and 15th and is centered on Hie Jinja Shrine. The fall festival is held on October 9th and 10th and is centered on Sakurayama Hachimangu Shrine. The main feature of both events is a parade of beautifully decorated festival floats through Takayama’s streets which is accompanied by traditional music, a costume parade, marionette puppet shows, and lion dance performances. In the evenings the floats are illuminated with lanterns and paraded around the city again.

Takayama Festival Floats Exhibition Hall displays four of the eleven floats which parade in the city’s fall festival. These beautiful floats are carved with intricate detail, and richly decorated with gold and lacquer-work. A shrine maiden gives a tour of the floats that are on display. The hall is located on the grounds of the Sakurayama Hachimangu Shrine and is a 20 minute walk or 9 minute taxi ride from Takayama Station. Entry to the hall is 900 yen for adults, 550 yen for Senior High Students, and 450 yen for Junior High Students and younger. The hall is open every day from 9.00 till 17.00 between March and November and from 9.00 till 16.30 between December and February.

Hida-no-Sato Folk Village is an outdoor museum with over 30 traditional rural buildings including farmhouses with thatched and shingled roofs. These are all original historic buildings from the surrounding region which were relocated here in 1971. Visitors can experience a variety of workshops and demonstrations of traditional crafts and farming life as well as seasonal events and festivals. Entry costs 700 yen for adults and 200 yen for children aged 6-15. The folk village is a 30 minute walk from Takayama Station or you can take a “Sarubobo” Bus from Takayama Bus Center next to Takayama Station and be there in 10 minutes. The fare is 210 yen.

Takayama can be easily reached from Osaka by train, bus or car. Probably the easiest way to travel is by train, but the other methods also have their advantages. 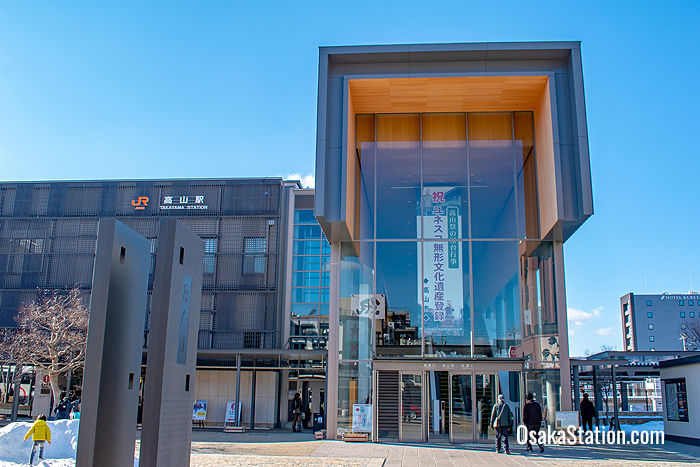 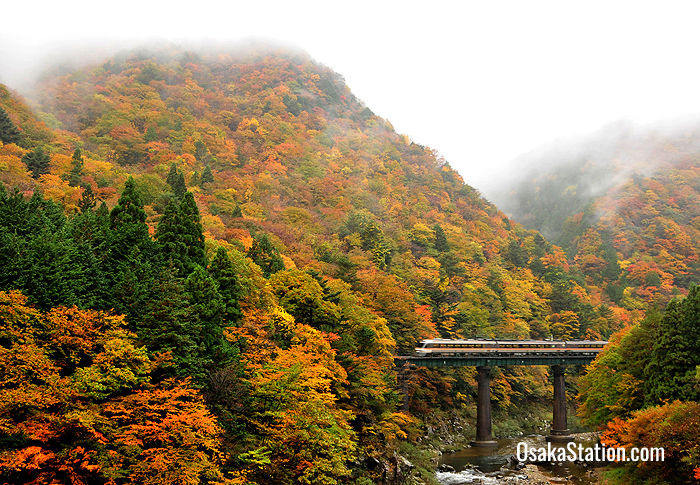 This service costs 7,780 yen for an unreserved seat, or 8,300 yen for a reserved seat. You can also take this train from Shin-Osaka Station, but the train fare is the same. There is just one Hida service from Osaka each day which leaves in the morning and gets into Takayama in time for lunch. The current train times are given below.

There are actually other Hida services which run between Nagoya and Takayama. If you want to travel at a later time and also have a shorter journey, you can join one of those services by first taking the Tokaido Shinkansen from Shin-Osaka Station to Nagoya and then changing to the Hida service there. As there are ten Limited Express Hida services from Nagoya each day, this gives you a broader range of options. This is also the fastest way to travel between Osaka and Takayama via public transport at around 3 hours and 45 minutes. However, your train fare will cost a little more. Non-reserved seats on both trains will cost 9,820 yen, and reserved seats will cost over 10,000 yen (fares for reserved seats on shinkansen trains change in peak and non-peak periods). The Japan Rail Pass fully covers the Limited Express Hida and also covers most shinkansen services, but it does not cover the Nozomi which is the fastest shinkansen between Osaka and Nagoya. To plan a journey via Nagoya use the JR West Timetable and Route Finder.

Taking a highway express bus is the cheapest way to travel between Osaka and Takayama. Nohi Bus and Kintetsu Bus run a joint express bus service between Osaka and Takayama which costs just 5,000 yen. You can board this bus at the OCAT bus terminal in Osaka’s Namba district or from the Higashi-Umeda bus stop which is close to Osaka Station. Travel times vary according to the time of day and travel conditions. However, the journey time from OCAT can take around 5 hours and 32 minutes and from Higashi-Umeda it can take around 5 hours and 17 minutes. The current schedule is given below.

Tickets for this service can be bought directly at OCAT or they can be reserved online or by telephone. For more details, including reservation information and bus stop locations, visit the Nohi Bus website.

You can drive between Osaka and Takayama in around 3 hours and 45 minutes via the following route.

This route will cost 7,850 yen in toll fees. Of course, you will have to include the cost of renting a car and the cost of gasoline into your overall expenses. However, if you are traveling in a group and you can share the cost then this could be an economical way to travel. It is also just as fast as the shinkansen and limited express route listed above. For information on car rental businesses in the Umeda area, please see our article Car Rental at Osaka Station.

There is a Tourist Information Center outside Takayama Station with English speaking staff who can offer advice on local sightseeing and transportation. The office also provides free multilingual sightseeing brochures and maps and can stow your baggage for 800 yen per item per day.

Although many locations can be reached on foot, Nohi Bus run two loop bus services from the bus terminal outside Takayama Station that cover more distant tourist locations. The Machinami Bus can be used to access Sanmachi Suji, and the Higashiyama Walking Course via Takayama Museum of History & Art (also called Hida Takayama Town Museum), and Takayama Festival Float Exhibition Hall. The Sarubobo Bus can be used to access Hida-no-Sato Folk Village. Check the Nohi Bus website for timetables or ask at the Tourist Information Center for more details.

There are a number of bicycle rental businesses close to Takayama Station. Hara Cycle Shop is a 7 minute walk from the station and rents bicycles for 300 yen for the first hour and another 200 yen for every hour after that. For 6 hours or more the bicycle is 1,300 yen. The shop is open between 9.00 and 20.00 but closed on Tuesdays. For more details and directions ask at the Tourist Information Center.