Sumiyoshi Taisha is Osaka’s most famous shrine and is located on pleasant grounds in the south of Osaka. The shrine has a long and respected history and is featured in the world’s first novel, the Tale of Genji, and also in the works of Nobel Prize winning 20th century novelist Yasunari Kawabata. During the three day New Year holiday period this shrine is incredibly popular and receives over 2 million visitors. 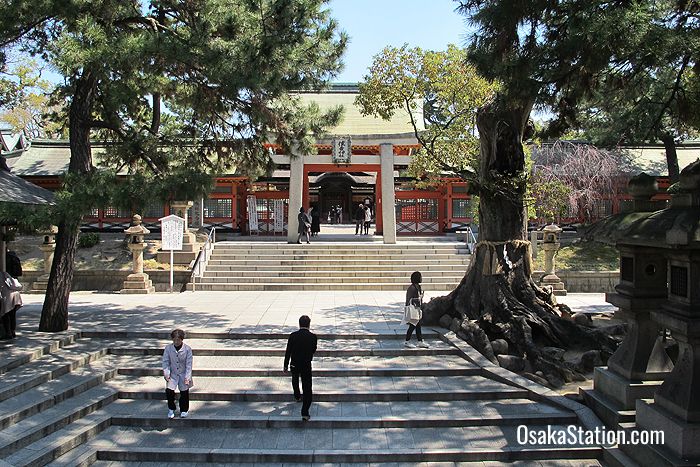 The entrance to Sumiyoshi Taisha Shrine

Sumiyoshi Taisha is an ancient Shinto shrine in Osaka which is believed to have been founded in the year 211. The semi-mythical story of its origins is recorded in Japan’s two oldest books: the Kojiki and the Nihon Shoki. According to this story it was founded by the Empress Jingu and dedicated to the Sumiyoshi Sanjin – the three gods of the sea. Though the shrine is far from the coast now, at that time it overlooked the sea. Later on the spirit of the Empress Jingu was also enshrined here and the gods of war and of poetry are worshipped here too, so this is a popular shrine for sailors, fishermen, travelers, the military, and poets! 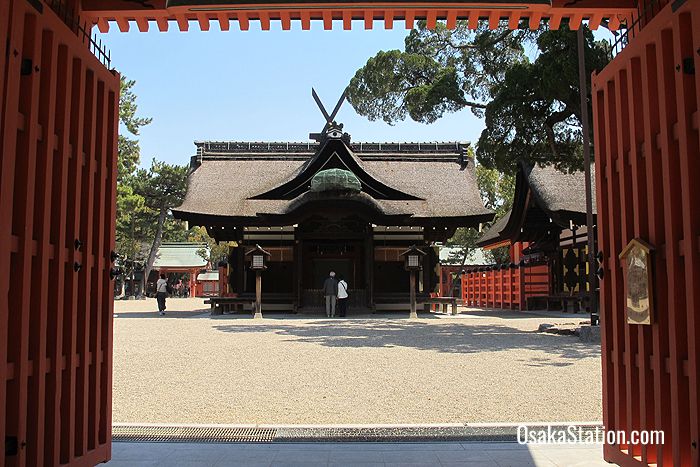 There are around 2,000 Sumiyoshi shrines in Japan, but this one is the main one. It is famous for having the oldest example of an ancient style of shrine architecture called sumiyoshi-zukuri. This is one of three styles of ancient shrine architecture that predate the arrival of Buddhism and other foreign influences to Japan.

Typical features of the sumiyoshi-zukuri architectural style are simple, straight thatched roofs that do not curve upward and decorative crossed poles on the roof’s gables. Pillars are painted vermilion, walls are painted white, and each shrine building has a surrounding wooden fence. There are many structures in the shrine complex but the four main buildings are dedicated to the three gods of the sea, and to the spirit of the Empress Jingu. 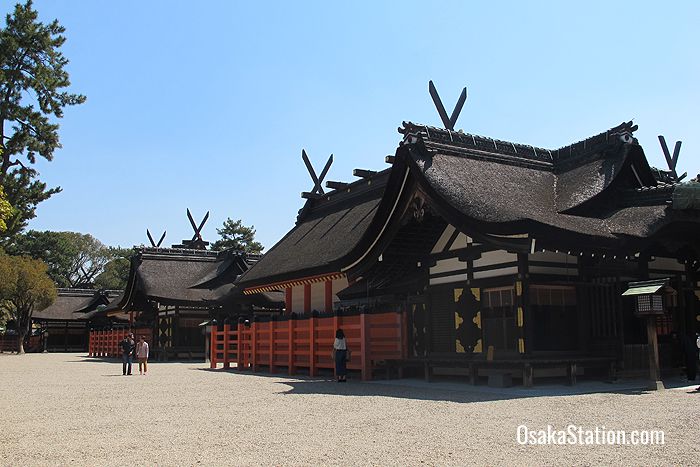 Similar to Ise Grand Shrine, Sumiyoshi Taisha has been dismantled and rebuilt many times over the centuries in a ritualistic act of renewal. However, the last time a complete renewal occurred was in 1810. This means that the oldest buildings at Sumiyoshi Taisha date back no further than the last rebuilding ritual in 1810. The architectural design itself is ancient though, as the buildings are always rebuilt in exactly the same way. For this reason the four main buildings are designated National Treasures. 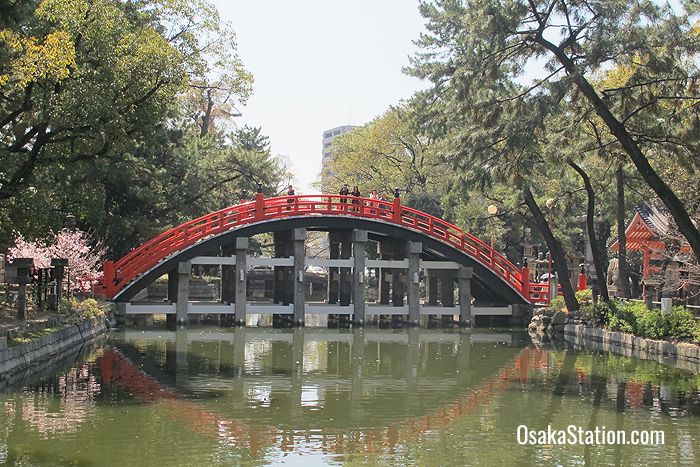 One of the most famous structures on the shrine grounds is the steeply arched bridge at the entrance that is properly called the Sorihashi or more popularly known as the Taikohashi. When the bridge was originally built around 400 years ago it would have crossed an inlet of the sea, but now it crosses a pond and provides an extremely scenic entry to the shrine. This bridge was deliberately built with a high arch in order to call to mind the rainbow that bridges the earth and sky. In 1948 Yasunari Kawabata wrote a novel called “Sorihashi” in which he noted that it was scarier to go down the bridge than it is to go up. On the south side of the bridge is a stone monument that commemorates these lines. 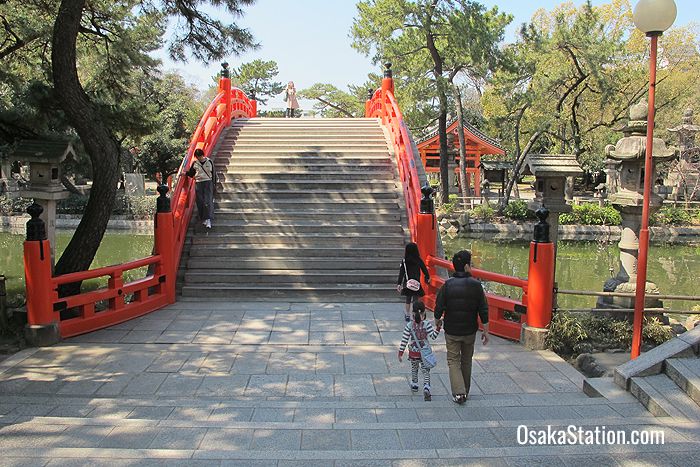 Climbing up the Sorihashi bridge