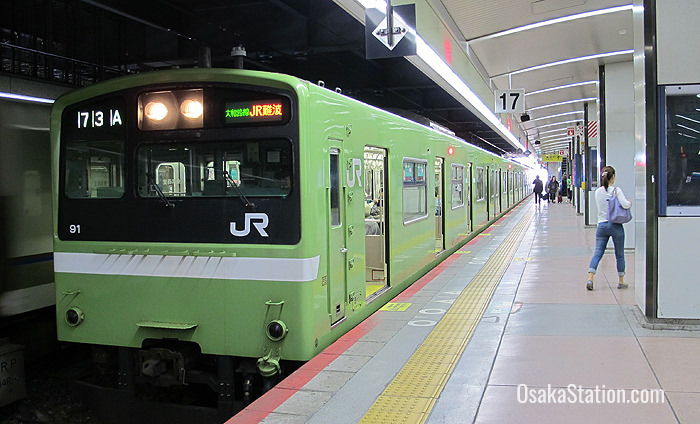 A Yamatoji Line train bound for Namba at Tennoji Station 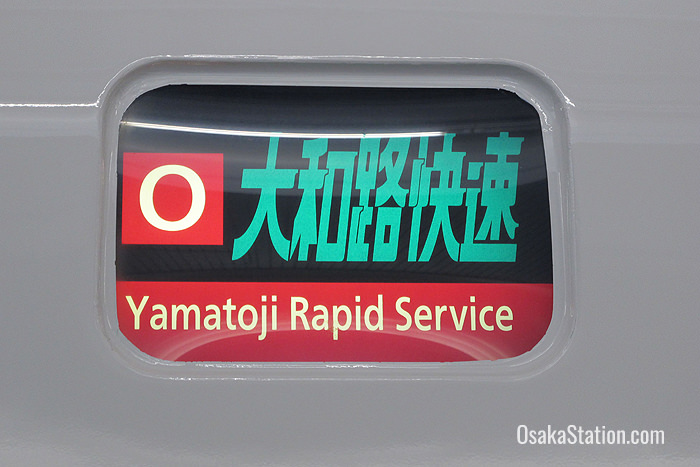 Key Destinations on the Yamatoji Line

There are 22 stations on the Yamatoji Line. These are as follows:

Train times and fares below are given from JR Namba Station.

A Yamatoji Line carriage flag on a Local train

JR Namba Station is the western terminus of the Yamatoji Line and serves the Namba area, a major shopping and entertainment district in Osaka. Famous sites here include the Glico running man image and the Kani Doraku crab image by the Dotonbori canal. Attractions include the leafy Namba Parks shopping mall, the Shin-Kabukiza Theater, and Hozen-ji Temple. Close by Hozen-ji Temple is Hozen-ji Yokocho, a celebrated stone flagged alleyway full of bars, cafes and eateries. You can download a map of the entire Minami area (including Namba, Nipponbashi and Shinsaibashi) from the Osaka Info website.

At Osaka Municipal Subway’s Namba Station transfer to the Sennichimae Line and the Yotsubashi Line.

Exit here for Imamiya Ebisu Shrine, which hosts a lively “Toka Ebisu” festival on the 9th, 10th and 11th of January. Also nearby are the Tsutenkaku Tower and Spa World.

Tennoji Station is located in central Osaka. The main attraction in this area is Shitennoji Temple, which dates from 593 and is Japan’s oldest Buddhist temple. Tennoji Park, Tennoji Zoo and Osaka Municipal Museum of Fine Art are also nearby. You can download a free map of the Tennoji area from the Osaka Info website.

Passengers from JR Namba Station should transfer here from a Local to a Rapid Service train.

Horyuji Station is located in the city of Ikaruga in Nara Prefecture. This city is famous for its ancient temples: Horyuji Temple, Hokkiji Temple and Horinji Temple. The first two temples are designated UNESCO World Heritage sites.

Train fare: 460 yen
Train time: 36 minutes by Local train to Kyuhoji Station and then by a Rapid Service train

Koriyama Station is located in the city of Yamatokoriyama in Nara Prefecture. The city is best known for its castle and for Yatadera Temple which is renowned for its hydrangea garden.

Train fare: 560 yen
Train time: 43 minutes by Local train to Kyuhoji Station and then by a Rapid Service train

The city of Nara is famous for its many shrines and temples, many of which date back to the 8th century when Nara was Japan’s first permanent capital. Eight locations are UNESCO World Heritage Sites. Transfers can be made here to the JR Nara Line bound for Kyoto.

Train fare: 560 yen
Train time: 51 minutes by Local train to Kyuhoji Station and then by a Rapid Service train

Kamo Station is the eastern terminus of the Yamatoji Line and is located in the city of Kizugawa in the southernmost part of Kyoto Prefecture. This station is convenient for Joruriji Temple which is famous for its beautiful Heian era garden. The temple pagoda, main hall and many of its statues are designated National Treasures. Transfer here to trains that continue on the Kansai Main Line toward Nagoya.

Train fare: 970 yen
Train time: 67 minutes by Local train to Kyuhoji Station and then by a Rapid Service train 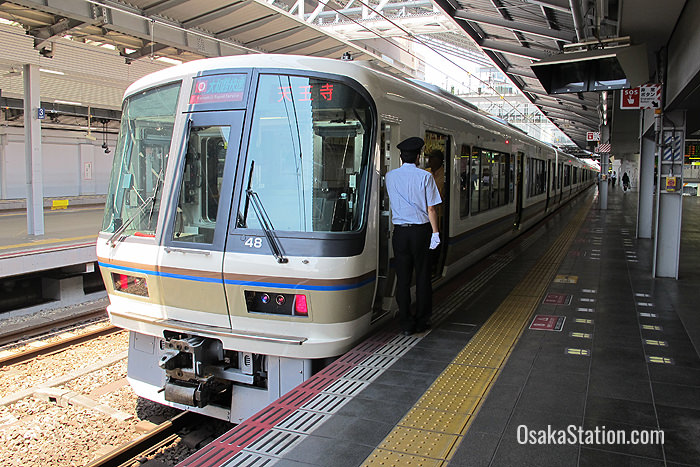 On the Osaka Loop Line this service stops at all stations between Tennoji and Osaka and then makes limited stops at Fukushima Station, Nishikujo Station, Bentencho Station and Taisho Station before joining the Yamatoji Line at Shin-Imamiya Station. During peak travel periods however, this train is replaced by the Regional Rapid Service, which follows the same route as the Yamatoji Rapid Service but stops at every station on the Osaka Loop Line. 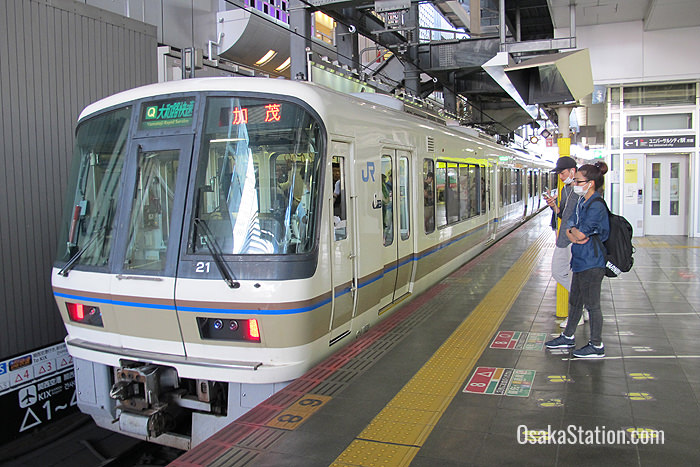 Some of the Regional Rapid Trains follow the same route along the Osaka Loop Line and Yamatoji Line until they reach Oji Station. There they are diverted to the Wakayama Line and do not go on to Nara or Kamo Stations. They terminate instead at either Takada Station or Gojo Station on the Wakayama Line. For this reason it is important to check your destination before boarding your train. At Osaka Station, trains bound for Nara and Kamo depart from Platform 1 and trains bound for Tennoji depart from Platform 2. 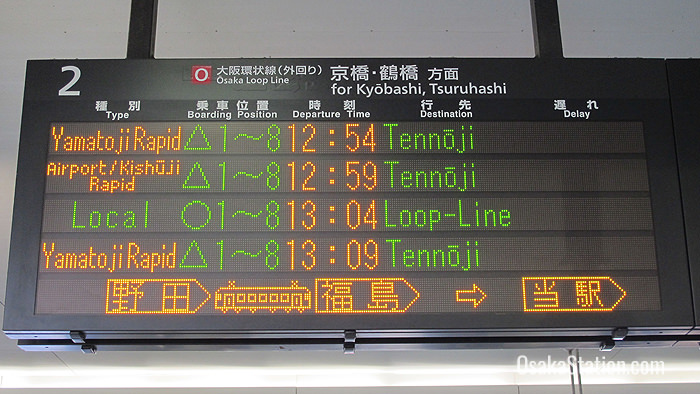 At Osaka Station trains for Tennoji depart from Platform 2

Traveling from Namba Station, take the local train of the Yamatoji Line to Kyuhoji Station and then transfer to the Yamatoji Rapid Service. This will get you to Nara Station in 51 minutes for 560 yen and to Kamo Station in 67 minutes for 970 yen. To plan your journey, use the JR West Timetable and Fare Finder.