For passengers traveling to Kobe, there are two main destinations: the Sannomiya area, and Shin-Kobe Station. Of these two destinations, Sannomiya is the most convenient as it gives immediate access to Kobe’s main area of business, shopping and entertainment. Sannomiya is also very well connected because it is served by three major stations which are run by JR West, Hanshin Electric Railway, and Hankyu Railway. Shin-Kobe Station is located north of the city center. This station is connected to other cities by the Sanyo Shinkansen line, and is connected to the center of Kobe by the city subway. There is also another station called simply Kobe Station which is run by JR West. This is a little far from the center of the city, but is convenient for the Harborland shopping and entertainment district.

In this article we will look at the best rail links to these destinations from Osaka’s major transportation hubs at Shin-Osaka, Umeda, Namba, and the city’s two main airports.

Traveling to Kobe from Shin-Osaka

The shinkansen bullet train travels between Shin-Osaka Station and Shin-Kobe Station in just 13 minutes. An unreserved ticket costs 1,500 yen and a reserved seat costs 2,890 yen. Traveling by shinkansen can be economical if you have a Japan Rail Pass. However, please be aware that two of the fastest trains on this route, the Nozomi and the Mizuho, are not covered by the Japan Rail Pass. 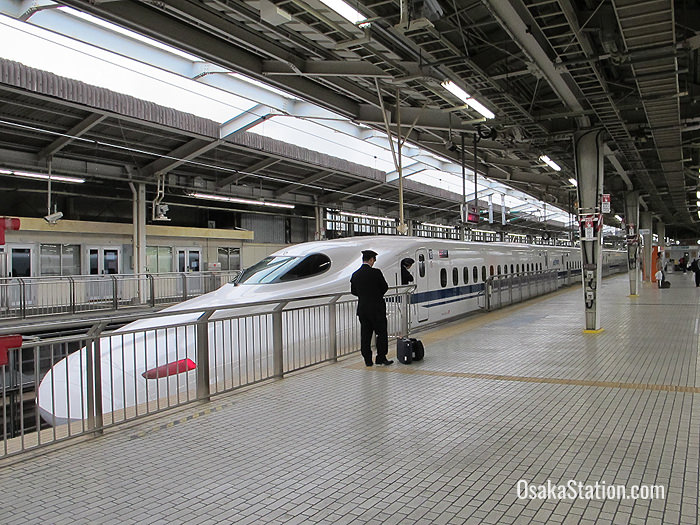 A shinkansen train at Shin-Osaka station bound for Shin-Kobe

An alternative to the shinkansen, is to travel from Shin-Osaka Station using a Special Rapid Service (via Osaka Station) on the JR Kobe Line. This will get you to JR Sannomiya Station in 27 minutes for 550 yen and to Kobe Station in 31 minutes for 640 yen.

Traveling to Kobe from Umeda (Osaka Station and Osaka-Umeda Station) 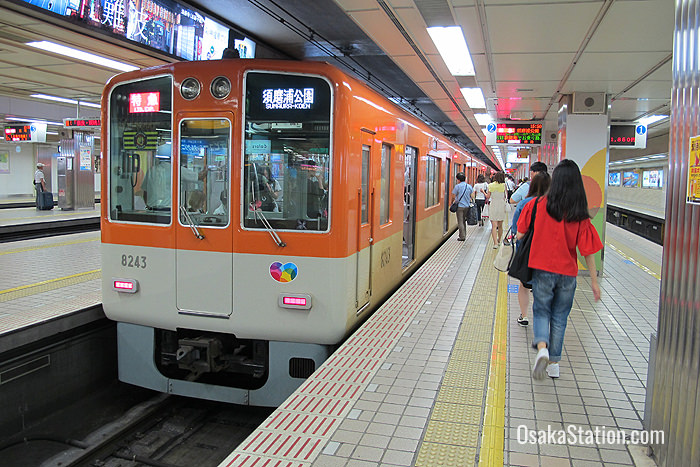 A train on the Hanshin Kobe Main Line

A Rapid Express on the Hanshin Main Line will get you from Hanshin Osaka-Umeda Station to Hanshin Kobe-Sannomiya Station in approximately 30 minutes for 320 yen. This is pretty much the same as a Limited Express on the Hankyu Kobe Line which travels from Hankyu Osaka-Umeda Station to Hankyu Kobe-Sannomiya Station in roughly 32 minutes for 320 yen. There is not really much to choose between the two private lines, but in Kobe the Hanshin station is slightly better positioned for areas to the south of Kobe-Sannomiya, and the Hankyu station is a little more convenient for areas to the north. 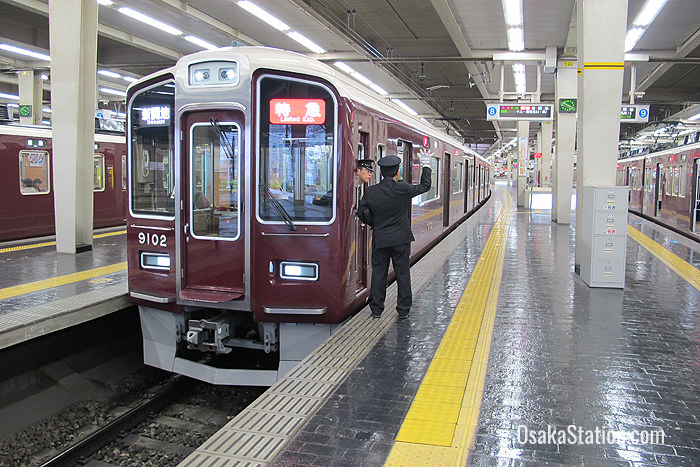 A Limited Express on the Hankyu Kobe Line

The Special Rapid Service on the JR Kobe Line provides the fastest service between Osaka Station and Kobe. This will get you to JR Sannomiya Station in 22 minutes and to Kobe station in 25 minutes. The fare for both stations is 410 yen, which is expensive compared to Hankyu and Hanshin fares. However, this line is covered by the Japan Rail Pass. Because the Hankyu and Hanshin Railways are private railway companies you cannot use the Japan Rail Pass on their lines. 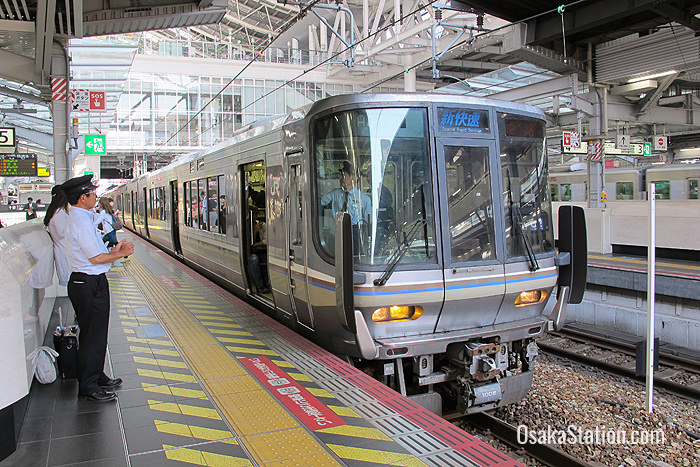 A Special Rapid Service on the JR Kobe Line

Traveling to Kobe from Namba

The most direct route from Osaka’s Namba district to Kobe is to take a Rapid Express through train on the Hanshin Namba Line from Osaka Namba Station. This will get you to Hanshin Kobe-Sannomiya Station in 44 minutes for 410 yen. 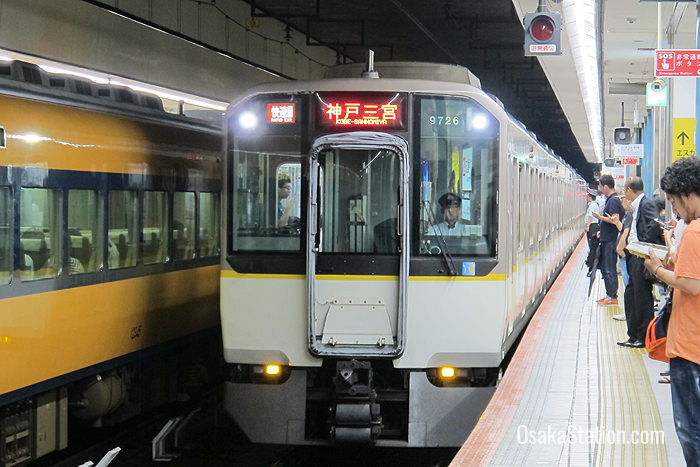 The Hanshin Rapid Express for Kobe-Sannomiya

To travel by rail from Kansai International Airport to Kobe, take the Kansai Airport Rapid Service to Osaka Station and then transfer to the JR Kobe Line. This will take 1 hour and 40 minutes and cost 1,710 yen. 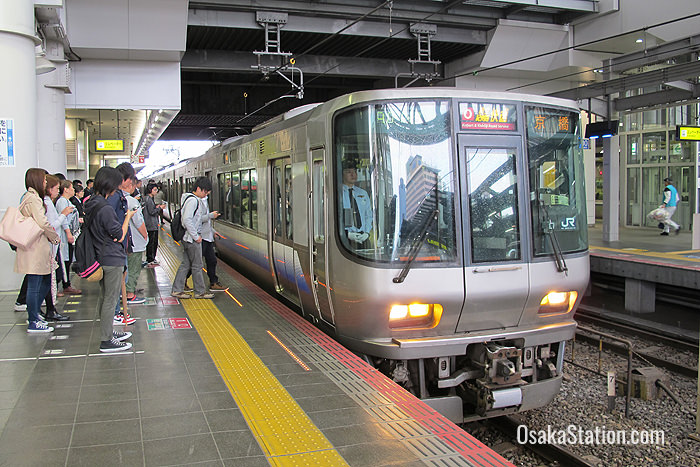 There are also Limousine Bus services that run regularly between Kansai International Airport and Kobe-Sannomiya. These take just 65 minutes and cost 1,950 yen for adults and 980 yen for children. 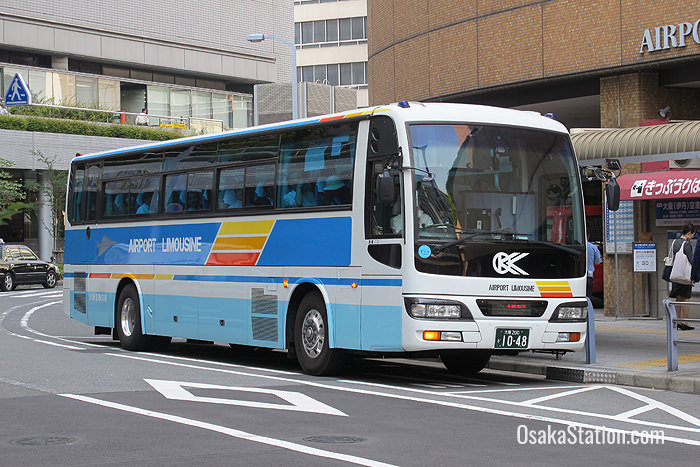 The simplest rail route from Osaka Itami Airport is to take the Osaka Monorail to Hotarugaike Station, then take the Hankyu Takarazuka Line to Juso Station. There you can catch a Limited Express on the Hankyu Kobe Main Line bound for Hankyu Kobe-Sannomiya Station. The whole journey will take 44 minutes and cost just 570 yen.

There are also Limousine Bus services that run regularly between Osaka Itami Airport and Kobe-Sannomiya. These take just 40 minutes, but cost 1,050 yen for adults and 530 yen for children.