The Hanshin Main Line is an important commuter line that runs between Hanshin Osaka-Umeda Station in Osaka and Motomachi Station in the city of Kobe. Because it is run by the private Hanshin Electric Railway, it is not covered by the Japan Rail Pass. However, if you do not have a Japan Rail Pass the Hanshin Main Line is cheaper. Alternative discount passes for the Hanshin Railway are listed at the end of this article. 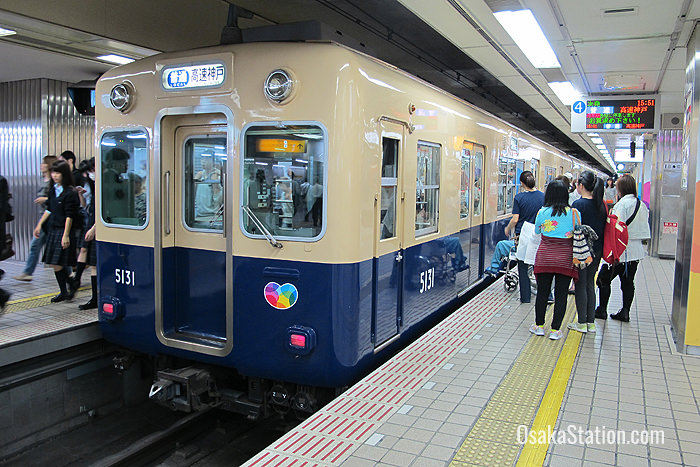 Hanshin Osaka-Umeda Station serves the Umeda area, which is Osaka’s most popular shopping district. Here you can find the Hankyu, Daimaru, Hanshin and Isetan department stores. Other popular attractions and shopping areas in Umeda are the Umeda Sky Building, HEP Five, and Grand Front Osaka. You can find maps for the Umeda area at the Umeda Connect website and at the Osaka Info website.

At Hankyu Osaka-Umeda Station transfer to Hankyu lines for Kobe, Kyoto, and Takarazuka.

Transfer here to the Osaka Loop Line and to the nearby Shin-Fukushima Station for the JR Tozai Line.

Transfer here to the Hanshin Namba Line for Namba and Nara. 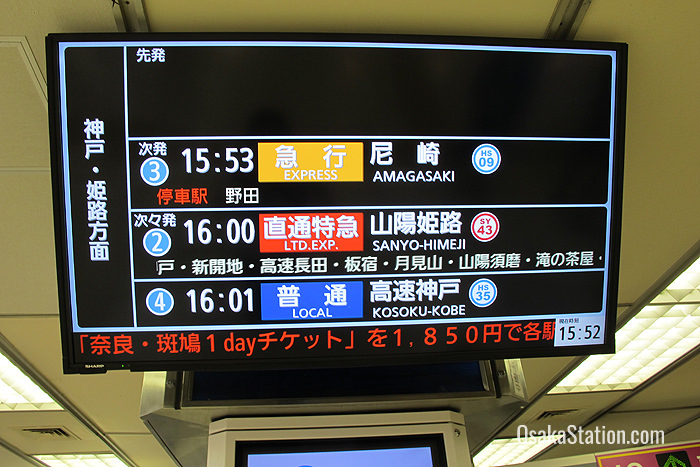 Information on trains and platforms is given in English and Japanese

Transfer here to the Hanshin Namba Line. Hanshin Amagasaki Station is a 10 minute bus ride from JR Amagasaki Station which has lines for Kobe, Kyoto and Takarazuka as well as the JR Tozai Line for Kitashinchi.

This is the nearest station to Koshien Stadium, a baseball stadium which is famous as the home of the Hanshin Tigers baseball team, and also as the host of the annual National High School Baseball Championships. Koshien was founded in 1924 and is Japan’s oldest baseball stadium. Baseball fans can visit a museum on site.

Transfer here to the Hankyu Imazu Line for Takarazuka.

Train fare: 270 yen
18 minutes by Direct-Limited Express to Koshien and then by Local train

Exit here for the ancient Nishinomiya Shrine which is dedicated to Ebisu, the god of prosperity. JR Nishinomiya Station on the JR Kobe Line is a 15 minute walk north-east of this station

Exit here for the Hakutsuru Sake Factory and Museum. JR Sumiyoshi Station on the JR Kobe Line is a 12 minute walk north of this station.

Train fare: 300 yen
Train time: 27 minutes by Direct-Limited Express to Nishinomiya and then by Local train

This station is convenient for the popular sightseeing and hiking area of Mount Rokko. Buses from the station take passengers to the Rokko Cable Car which will take you up Mount Rokko. At the top you can enjoy an observation deck with spectacular views, terrace dining, an alpine botanical garden and a musical box museum!

Maya Station on the JR Kobe Line is a 4 minute walk north of this station.

Train fare: 300 yen
Train time: 32 minutes by Direct-Limited Express to Mikage and then by Local train

This station is convenient for Hyogo Prefectural Museum of Art which was designed by Tadao Ando and houses major collections of sculptures, prints, and paintings. Nada Station on the JR Kobe Line.

Train fare: 300 yen
Train time: 33 minutes by Direct-Limited Express to Mikage and then by Local train

Kobe Sannomiya Station is the main station for people visiting Kobe City, as it gives immediate access to Kobe’s main area of business, shopping and entertainment. Kobe itself is an attractive cosmopolitan port city. Its main attractions are Chinatown, Kobe Harborland, Meriken Park, and the Ijinkan, an area of foreign houses built in the 19th century.

Transfers can be made here to the Hankyu Kobe Line, and the Kobe Kosoku Line, to the Kobe Municipal Subway, and to the Port Island Line. JR Sannomiya Station on the JR Kobe Line is also located right beside the Hanshin and Hankyu Stations.

This station is close to the Motomachi shopping district in Kobe, and to Kobe’s Chinatown. Transfers can be made here to the Kobe Kosoku Line and the JR Kobe Line. 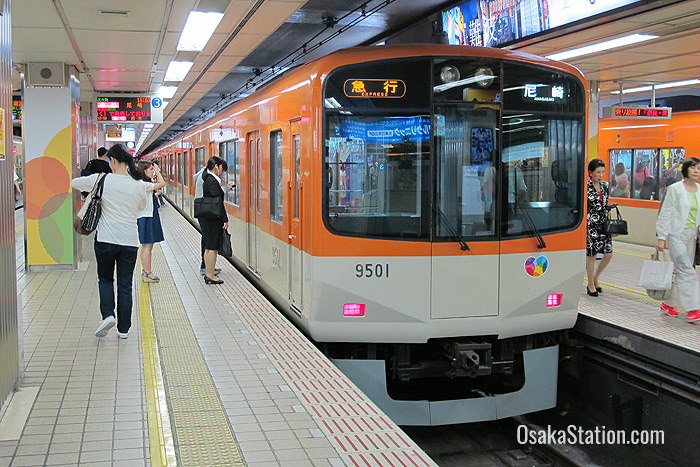 In addition to the Hanshin Main Line there are two other competing rail lines that connect Osaka with Mount Rokko and Kobe: the JR Kobe Line and the Hankyu Kobe Line. All three of these lines have convenient stations in Umeda and at the Mount Rokko and Kobe destinations. Let’s compare their services.

Taking the Hankyu Kobe Line from Hankyu Osaka-Umeda Station to Rokko Station takes 26 minutes for a fare of 320 yen. From Rokko Station it is then a 10 minute bus ride to the Rokko Cable Car.

Taking the Hanshin Main line from Hanshin Osaka-Umeda Station to Mikage Station takes 25 minutes for a fare of 300 yen. From Mikage Station it is then a 30 minute bus ride to the Rokko Cable Car.

A Rapid Express on the Hanshin Main Line will get you from Hanshin Osaka-Umeda Station to Hanshin Kobe-Sannomiya Station in approximately 30 minutes for 320 yen. This is cheaper than the JR service but pretty much the same as a Limited Express on the Hankyu Kobe Line which covers the same distance in roughly 32 minutes for 320 yen. There isn’t really much to choose between the two private lines, but in Kobe the Hanshin station is slightly better positioned for areas to the south of Kobe-Sannomiya, and the Hankyu station is a little more convenient for areas to the north. 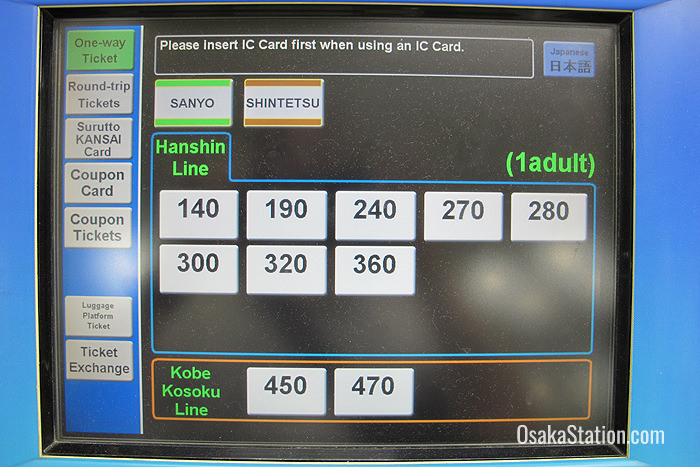 Visitors from overseas can also get a Kansai Thru Pass (also called the Surutto Kansai Pass) for two or three days. This covers not only the Hanshin Electric Railway but many of the private railways, buses and subway systems in Osaka, Kyoto, Kobe, Nara and Shiga. This pass cannot be used on JR Railways however. Visit the Kansai Thru Pass website to find out more. 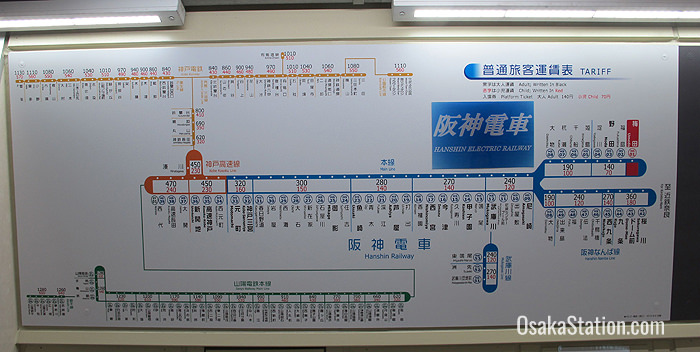 Hanshin Electric Railway have a downloadable route map of lines with the Hanshin Main Line colored blue. Use an English language online route finder like Jorudan or Hyperdia to check for necessary transfers and plan your journey.