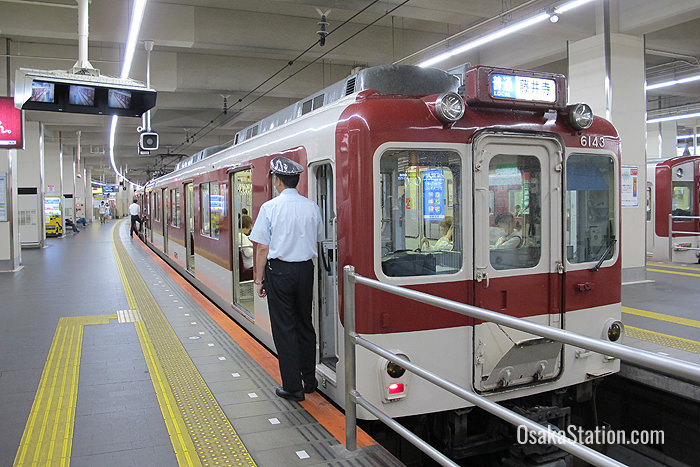 A Local train for Fujiidera Station

At Kashiharajingu-mae Station the line connects with the Kintetsu Yoshino Line, and many through trains run directly between Osaka Abenobashi and Yoshino Station. Yoshino is a popular tourist destination in Nara Prefecture and this is the main route to access it from Osaka. As Kintetsu Corporation is a private company, this railway is not covered by the Japan Rail Pass, however other discount rail passes for Kintetsu Railway are available and these are listed at the end of this article.

There are 28 stations on the Kintetsu Minami-Osaka Line. The key destinations and transfer points are given below with fares and train times given from Osaka Abenobashi Station. 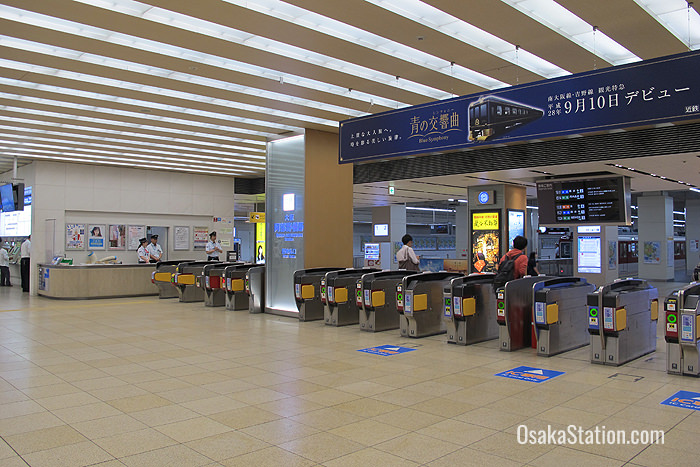 Osaka Abenobashi Station is located on the 1st floor of the Abeno Harukas building which at 300 meters high is Japan’s tallest building. Abeno Harukas also holds the Kintetsu Department Store, an art museum, an observatory deck from floors 58-60, and Osaka Marriott Miyako Hotel. Other attractions in the surrounding area include Tennoji Park, Tennoji Zoo, Osaka Municipal Museum of Fine Art, and Shitennoji Temple, which dates from 593 and is Japan’s oldest Buddhist temple.

Osaka Abenobashi Station is very close to Tennoji Station and so convenient for transfers to the Osaka Loop Line, the JR Hanwa Line, the JR Yamatoji Line and Osaka Municipal Subway’s Midosuji and Tanimachi Lines. At nearby Tennoji-Ekimae Station you can transfer to the tramway Hankai Uemachi Line.

This station is close to Bishoen Station on the JR Hanwa Line.

Kawachi-Amami Station is located in the city of Matsubara and is convenient for Hannan University.

This is the main station of Fujiidera City and is very convenient for Fujiidera Temple. Both the city and the station are named after this temple which dates from the 7th century and is famous for its statue of Thousand Armed Kannon, the Buddhist goddess of Mercy. The statue is only shown on the 18th of each month and during a special festival on August 9th. The temple is also a good place to view wisteria blossom during the months of April and May.

This station in Fujiidera City is convenient for both the Domyoji Temple and the Domyoji Tenmangu Shrine after which it is named. The ancient shrine and temple were once united but were separated as a part of national policy in 1872. The shrine is famous for its plum orchard which has 90 varieties of blossoming trees which bloom every February. Transfers can be made here to the Kintetsu Domyoji Line which runs to Kashiwara Station in Kashiwara City.

This station in Habikino City is close to several historic sites, such as the burial mound of the Emperor Ankan, Konda Hachimangu Shrine which is just south of the Emperor Ojin’s burial mound, and Shiratori Jinja or “White Bird Shrine” which is one of many locations across Japan that lay claim to be the final resting place of the mythological hero Yamato Takeru. Transfers can be made here to the Kintetsu Nagano Line which connects the cities of Habikino, Tondabayashi and Kawachi-Nagano. 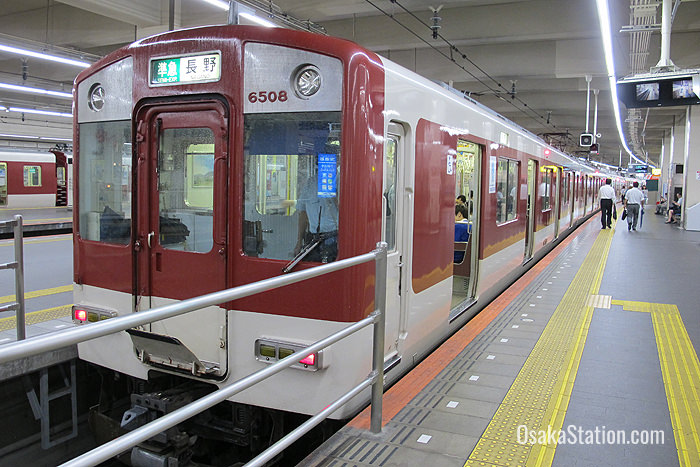 A Semi-Express for Kawachi-Nagano. This is a through service that is diverted onto the Kintetsu Nagano Line

This station is in the city of Katsuragi in Nara Prefecture. It is named after the nearby Taimadera Temple which dates from 612 and which is famous for its woven manadala, an embroidered pictorial representation of the Buddhist world view. Also not far from Taimadera Station is the city’s Sumo Museum. Katsuragi claims to be the birthplace of sumo wrestling and is very proud of this heritage.

Transfer here to the Kintetsu Gose Line which links the city of Katsuragi with the city of Gose.

This station in Kashihara City is the terminus of the Kintetsu Minami Osaka Line. It is convenient for Kashihara Jingu Shrine, which dates from 1889 and according to legend is where the first Japanese emperor, Emperor Jimmu, ascended to the imperial throne. Transfer here to the Kashihara Line for Kyoto and Yamato-Saidaiji and the Yoshino Line for Yoshino. 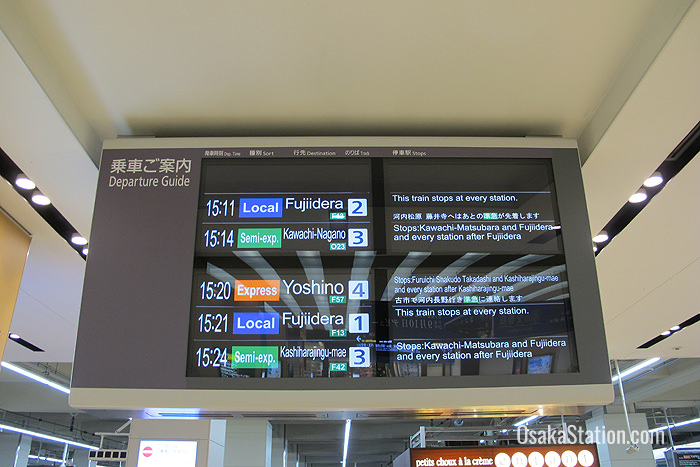 Traveling on to Yoshino

Mount Yoshino is a famous scenic spot in Nara Prefecture which has long been celebrated in poetry for the beauty of its cherry blossoms in the spring. Many through train services run directly between Osaka Abenobashi Station and Yoshino Station, so you may not need to transfer at Kashiharajingu-mae. The fare between Osaka Abenobashi Station and Yoshino Station is 970 yen and with a transfer at Kashiharajingu-mae Statiion this journey could take between 85 – 95 minutes. A Limited Express train will take you there without transfers in just 76 minutes, but you will need to pay a Limited Express surcharge of 510 yen on top of the regular fare. 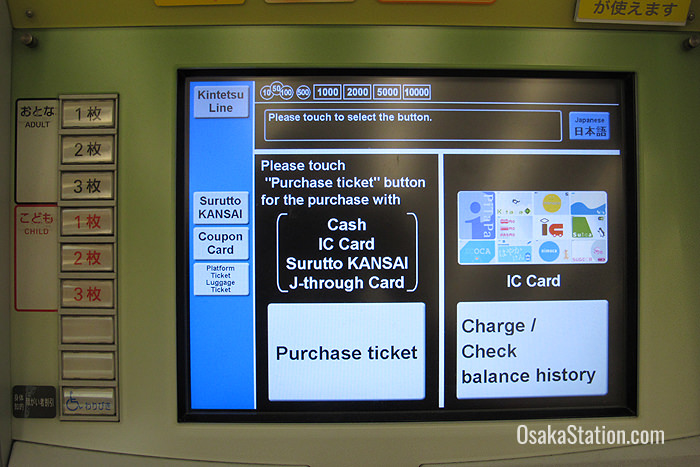 The Kintetsu Rail Pass costs 3,800 yen for adults and 1,900 yen for children aged 6 – 11. Children under 6 years of age can travel for free. This pass gives you 5 days of unlimited travel on all Kintetsu lines and the Iga Railway and 3 tickets for the Kintetsu Limited Express. Discounts for many shops, museums and sightseeing facilities are also included in this pass.

The Kintetsu Rail Pass Wide costs 5,860 yen for anyone aged 6 and over but children under 6 can travel for free. This pass has all of the benefits of the Kintetsu Rail Pass with the added benefit of 2 vouchers for journeys between Kansai International Airport and any Kintetsu Station. It also includes 5 days of unlimited rides on Mie Kotsu buses and Toba’Kamome’ Bus in the Ise-Shima area.

One day or two day passes are also available for a limited number of lines. For more details visit the official Kintetsu Railway website.