The Kintetsu Nara Line is a private railway operated by Kintetsu Corporation that runs between Fuse Station in Osaka and Kintetsu Nara Station in the historical city of Nara. This line is actually one of a series of rail lines that link the cities of Nara, Osaka, Amagasaki, and Kobe and there are Rapid Express services that run between all four cities on these lines. For practical purposes this means that you can board a train bound for Kintetsu Nara Station at Kobe-Sannomiya Station, Hanshin Amagasaki Station or Osaka Namba Station. 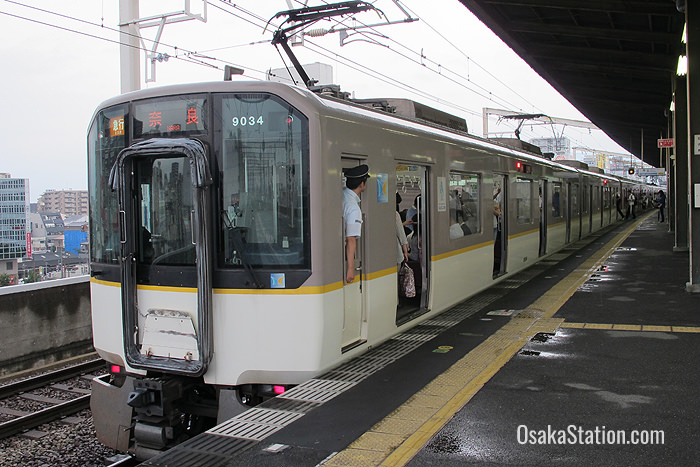 An Express train bound for Nara

If you are traveling from Osaka, then Osaka Namba is the most convenient station from which to board the Rapid Express to Kintetsu Nara Station. In this article we will look at the key destinations on the Kintetsu Nara Line proper and then look at Rapid Express through train services from other lines. Because the Kintetsu Nara Line is a private railway line, it is not covered by the Japan Rail Pass. However, there are other discount passes available that we will examine at the end of this article.

Technically the Kintetsu Nara Line starts at Fuse Station, but for all practical purposes services on this line actually begin at Osaka Namba Station on the Kintetsu Namba Line. Trains will stop at the following stations before reaching Fuse:

There are 19 stations on the Kintetsu Nara Line proper and these are as follows:

Key destinations and transfer points are given below with fares and example train times given from Osaka Namba Station. 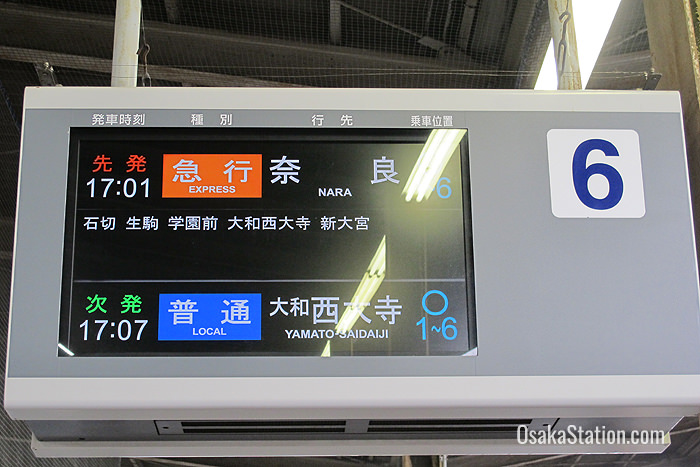 Platform information is given in English as well as Japanese

The Namba area is a major commercial district in central Osaka, which is famous for Hozen-ji Temple and Hozen-ji Yokocho, a celebrated stone flagged alleyway full of bars, cafes and eateries. Osaka Namba Station is part of a major transportation hub in the Namba area of Osaka and is easily accessed either directly by the Hanshin or Kintetsu lines or indirectly via three other nearby stations. These are: JR Namba Station, Osaka Municipal Subway’s Namba Station, and Nankai Namba Station.

JR Namba Station is accessed by the JR Yamatoji Line.

And Osaka Municipal Subway’s Namba Station is accessed by the Midosuji, Sennichimae, and Yotsubashi lines.

This station is convenient for the National Bunraku Theatre, the Kuromon Ichiba food market, and the cheap electronics stores of Denden Town. East bound trains for the Kintetsu Nara Line and west bound trains for the Hanshin Namba Line stop at this station. However, Limited Express trains and trains bound for the Kintetsu Osaka Line do not stop at this station. Osaka Municipal Subway’s Nippombashi Station is nearby and there transfers can be made to the Sakaisuji Line and Sennichimae Line.

This station is convenient for the Shinkabukiza Theater, the Sheraton Miyako Hotel Osaka and the information exchange center at Osaka International House. Osaka Uehommachi is the eastern terminus of the Kintetsu Namba Line and the western terminus of the Kintetsu Osaka Line. At nearby Tanimachi Kyuchome Station transfers can be made to the Tanimachi Subway Line and the Sennichimae Subway Line.

Exit here for Miyuki-dori Shopping Street (also known as Korea Town) and the famous Korean “yakiniku” or grilled meat restaurant Ajiyoshi. There are three closely connected stations here which are run by Kintetsu, JR West, and Osaka Municipal Subway. Transfers can be made to the JR Osaka Loop Line, the Sennichimae Subway Line, and to trains bound for the Kintetsu Osaka Line.

Trains bound for the Kintetsu Nara Line and Kintetsu Osaka Line both make stops at this station.

Transfers can be made here to the Kintetsu Osaka Line. Though this is officially the western terminus of the Kintetsu Nara Line, many through train services from Nara run beyond Fuse to Osaka Namba Station, Hanshin Amagasaki Station, and Kobe-Sannomiya Station.

Transfers can be made at nearby JR Kawachi-Eiwa Station to the Osaka Higashi Line.

Exit here for Hanazono Central Park which contains the Dream 21 Planetarium and the Hanazono Rugby Stadium. The stadium, which was opened in 1929, is Japan’s oldest rugby stadium and has a close relationship with the station which was originally called the “Rugby Ground Station”. Considered the Mecca of Japanese rugby, this stadium is still a major venue for national and international games and holds some historical exhibits in the Rugby Library. The home team are called the “Kintetsu Liners” and are owned by Kintetsu Corporation.

15 minutes’ walk from this station in Higashi-Osaka will take you through an old-fashioned shopping street to Ishikiri-Tsurugiya Shrine. The shrine, which is said to date from 658, is dedicated to the god of healing so many people come here to pray for relief from illness.

Exit here for the original site of the Heijo Palace and the Nara Palace Museum. The large temple complex of Saidaiji Temple which dates from 765 is also nearby. Transfers can be made here to the Kintetsu Kyoto Line, and the Kintetsu Kashihara Line. 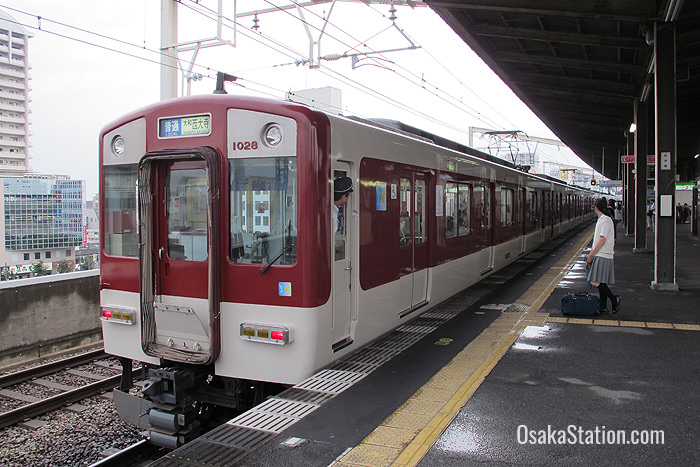 A Local train for Yamato-Saidaiji

The city of Nara is famous for its many shrines and temples, many of which date back to the 8th century when Nara was Japan’s first permanent capital. Eight locations are UNESCO World Heritage Sites. Kintetsu Nara Station is convenient for Nara Park, and Kofukuji Temple a UNESCO World Heritage Site which is famous for its five-story pagoda. JR Nara Station is located a 13 minute walk south west of the Kintetsu station. Read our guide to Kintetsu Nara Station. 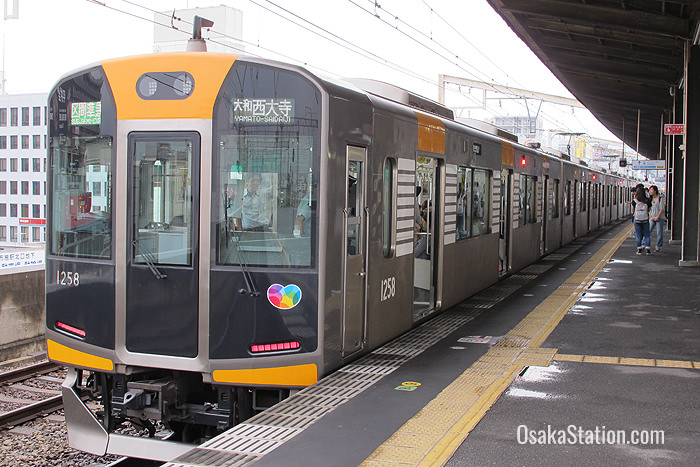 A Sub Semi-Express for Yamato-Saidaiji

Through Train Services from Other Stations 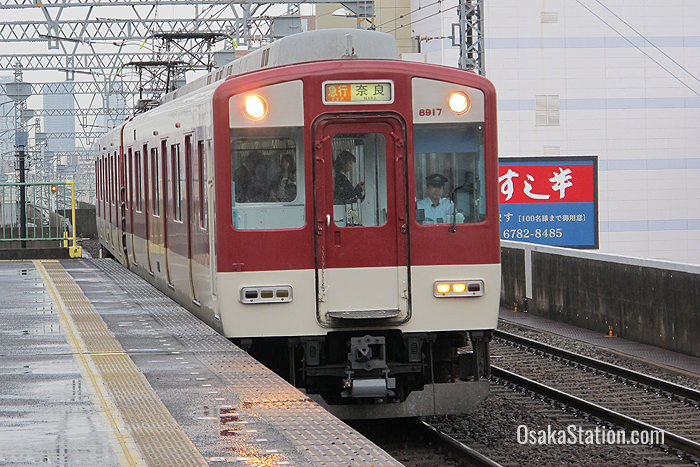 The Kintetsu Rail Pass costs 3,800 yen for adults and 1,900 yen for children aged 6 – 11. Children under 6 years of age can travel for free. This pass gives you 5 days of unlimited travel on all Kintetsu lines and the Iga Railway and 3 tickets for the Kintetsu Limited Express. Discounts for many shops, museums and sightseeing facilities are also included in this pass.

The Kintetsu Rail Pass Wide costs 5,860 yen for anyone aged 6 and over but children under 6 can travel for free. This pass has all of the benefits of the Kintetsu Rail Pass with the added benefit of 2 vouchers for journeys between Kansai International Airport and any Kintetsu Station. It also includes 5 days of unlimited rides on Mie Kotsu buses and Toba’Kamome’ Bus in the Ise-Shima area.